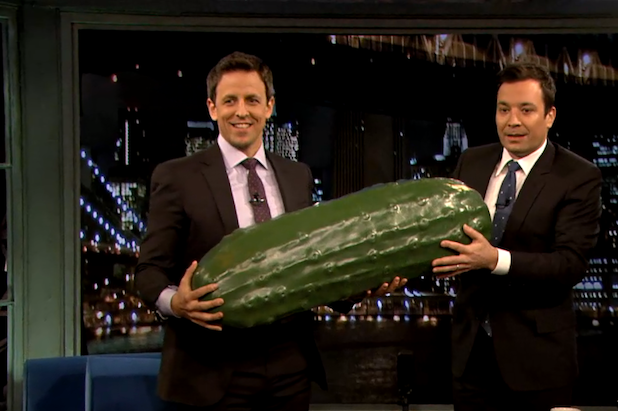 It’s a ritual that’s nearly as old as late night comedy itself.

“I don’t know if I have room for it,”Meyers said as he grabbed the oversize dill.

“Hold back the emotion,” Fallon advised.

Also Watch: Bill Hader on Crazed Male Fan Who Told Him ?I So Want to F-ck Stefan? in Front of Your Daughter (Video)

Fallon, who is vacating the program after five years to take over “The Tonight Show” from Jay Leno,  said that Conan O’Brien gave the pickle to him before departing for his short-lived and unhappy stint at “The Tonight Show.” O’Brien said that the writers of David Letterman’s “Late Night” program gave him the pickle when he took over.

Fallon’s mention of O’Brien prompted loud applause from the studio audience for O’Brien, who was pushed out of NBC in 2010.

“I wouldn’t have this job without Conan O’Brien..he’s a great guy,” Fallon said.

Fallon kicks off his new gig on Feb. 17, while Meyers begins his stint at “Late Night? on Feb. 24.