Jimmy Fallon took a break from lip syncing with stars or playing word games to tackle a serious topic on Tuesday when he invited one of the heroes from last month’s Amsterdam train shooting onto “The Tonight Show.”

Anthony Sadler, a senior at Sacramento State University, along with childhood friend air force serviceman Spencer Stone and Alek Skarlatos, helped to disarm a gunman when he opened fire on a train traveling from the Dutch city to Paris on Aug. 21.

“I know you’ve probably told the story a thousand times,” Fallon told Sadler, as he recounted the story.

“I could tell it to you all day. We were in the middle of Europe trip on our way to Paris coming from Amsterdam, I was actually asleep at the time … there was gunshot, glass shattering,” the California native recalled.

“I don’t really notice because I am asleep but a train employee sprints down the hallway. That commotion wakes me up, I look over at my friends and they duck down.” Both Stone and Skarlatos have military training, so Sadler followed their lead.

“There’s the gunman coming in the train cocking an AK, I was like, ‘Is this real? Is somebody playing a joke?”

His friends said “go” and Sadler followed them. “We got to beat him down a little bit.”

“In the midst of us beating him up he dropped the gun and pulled out a box cutter, so we had to beat him up a little more,” he said. The gunman managed to deliver a deep cut to Stone, before the trio knocked him unconscious. 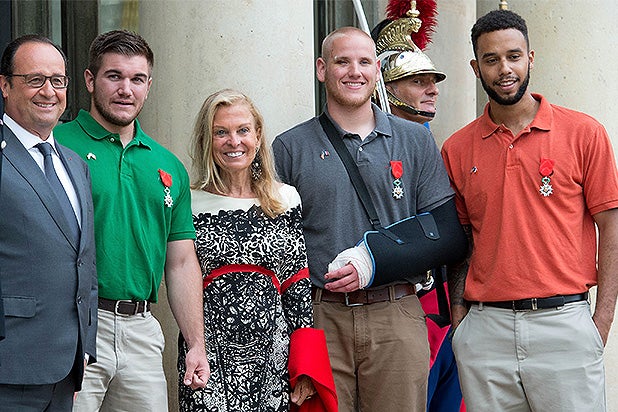 However, the American heroes nearly didn’t even make it onto the train, Sadler revealed Tuesday.

“We were having so much fun in Amsterdam, we almost didn’t leave,” he said, prompting Fallon to make a string of jokes about smoking weed. “So you were ‘sleeping’ on the train?” he laughed.

“The whole ordeal only lasted a minute or two minutes,” Sadler continued, and then the train pulled into a station at Arras, near the French-Belgian border, while Stone still had his fingers stuck in the neck of a victim to quell the bleeding — ultimately saving his life. Miraculously, no one was killed.

“I’m just a college student. I came to see my friends for my first trip to Europe and we stop a terrorist. It’s kind of crazy,” Sadler told French news agency AFP after the attack.

The suspect, Ayoub El-Khazzani, 25, was carrying 270 bullets for his assault rifle and a bottle of petrol. The Moroccan’s phone showed that he had watched a jihadist video shortly before launching the attack, and prosecutors have filed formal charges against him.

Sadler, Stone, Skarlatos and Norman have since been awarded medals for their bravery.

Leno takes his final bow on Thursday; 11 days later, Fallon will become the 10th host of the legendary NBC talk show. The exiting ”Late Night“ host and his announcer Steve Higgins will have some serious shoes to fill when ”The Tonight Show“ returns to New York City on Feb. 17.