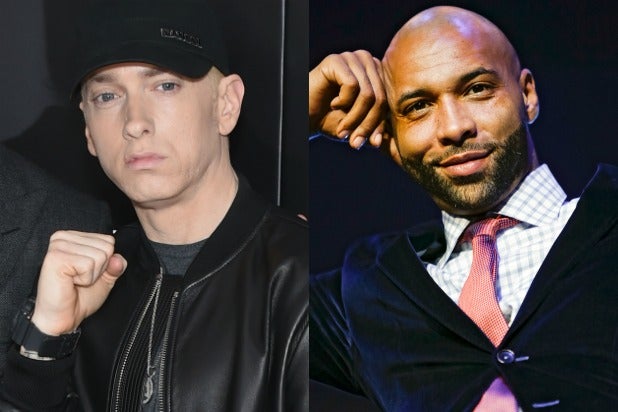 The host of “The Joe Budden Podcast” dedicated a very long portion of his Wednesday episode responding to Slim Shady’s few lines about the former Slaughterhouse leader.

“I’ve been better than you this entire f—ing decade,” Budden said on Wednesday’s show. “I’m a content n—a. You have not said anything for the better part of a whole f—ing decade. You have rhymed a bunch of words.”

“How could I be mesmerized of someone I think I’m better than?” Budden asked rhetorically, calling Marshall Mathers the “lesser emcee” of the two.

He also called Eminem “dated, uninformed” and “trash” — among other insults — during the podcast, which was riddled with roughly a million gunshot sound-effect noises.

As part of Slaughterhouse, Budden used to be an artist on Eminem’s Shady Records. Their (public) beef began when Budden criticized Eminem’s previous solo release, “Recovery.”

Here’s Eminem’s line about Budden on new song “Fall,” referencing a domestic violence charge against his target: “Somebody tell Budden before I snap, he better fasten it/Or have his body baggage zipped/The closest thing he’s had to hits is smacking b—hes.”

“You thought that domestic violence bar would get Joe out the bed?” Budden (sort of) wrapped up his thoughts. “You got the f—ing nerve. Insecure man.”

Budden, who also hosts a show on Diddy’s Revolt TV, promised Eminem that if the Detroit rapper tries to diss him outside of an album rollout, “I am gonna cut your f—ing ass up.”

Budden should probably listen to Eminem’s verse on the “Chloraseptic” remix here:

Listen to the full “TV & Mayonnaise” episode of “The Joe Budden Podcast” here: