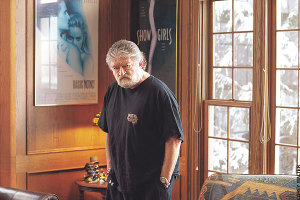 It turns out that Hollywood couldn’t kill Joe Eszterhas. But it did send him running to Jesus.  The writer whose movies defined an era – “Flashdance,” “Basic Instinct,” “Sliver," and (unfortunately) “Showgirls”  -- and whose personal battles with Mike Ovitz and extramarital exploits made modern Hollywood legends, has gotten religion. The old-fashioned kind. Eszterhas has just finished a book about himself and his relationship with Jesus, called “Cross-Bearer.” The title refers to himself, not to Jesus; Eszterhas now carries the cross at Sunday services in his Catholic church. I went to see him at his home in the countryside east of Cleveland, where he lives with his second wife Naomi and their four sons. His voice is a fainter version of the old grizzled rasp, but his hair is still a thick, Hungarian mane and his face still looks like a Harley biker’s after a bar brawl. Eszterhas came close to dying from his addiction to drinking and smoking. He contracted cancer, struggled with a tracheotomy – and, finally, he had an epiphany. Faith descended. Or ascended. It is this transformation that he describes in his book (out in the fall), even while he insists on differing with some central aspects of Catholicism. He takes issue with the church’s “wimpification” of Jesus, for example. Does Eszterhas see irony in his spiritual flip-flop? The man who defined carnal pulp for more than a decade, who religious conservatives blamed for dragging American culture into the gutter, has now joined the Jesus brigade? Eszterhas laughs, a carburetor turning in someone’s garage. Strange, indeed are the ways of the Almighty. He suggests I might better ask his old partner, Paul Verhoeven. The director too has gotten religion, and written a book about the Virgin Mary, scheduled to appear in bookstores next year. Hmmm. The maker of “Showgirls” takes on the Blessed Virgin? What’s next? Elizabeth Berkeley joins a convent?