Joe Rogan, who has repeatedly questioned the necessity and efficacy of the COVID-19 vaccines, has come down with the virus himself. He announced the news on his Instagram on Wednesday afternoon.

He captioned the post in all caps, writing “I GOT COVID.” He then added his apologies for having to move an upcoming show — as he is currently on tour — to October. According to Rogan, it was when he returned home from a show on Saturday night that he first started feeling sick.

“I got back from the road Saturday night, feeling very weary, I had a headache, and I just felt, just run down,” Rogan said. “Just to be cautious, I separated from my family, slept in a different part of the house, and throughout the night I got fevers and sweats and I knew what was going on.”

Rogan says he got tested on Sunday morning, which confirmed that he did in fact catch COVID. In response, Rogan says he “threw the kitchen sink at it,” taking various medications — including Ivermectin. 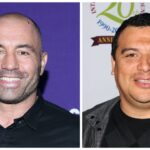 Also Read:
Joe Rogan, a Cancel Culture Critic, Called Out by Carlos Mencia – for Canceling Him

Ivermectin is typically used in the U.S. to treat or prevent parasites in animals like horses. For unclear reasons people have started using it, either in tablet or topical form, to treat COVID, despite there being no evidence that it helps and having no approval from the FDA.

Watch his full announcement below.