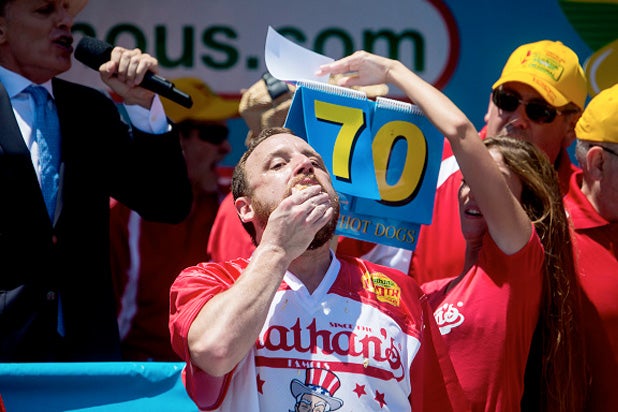 Joey Chestnut returned to glory by winning the Nathan’s Famous Hot Dog-Eating Contest on Monday when he chowed down on a record-breaking 70 hot dogs in 10 minutes.

In the women’s event, reigning champion Miki Sudo defended her title by eating 34 hot dogs. This is slightly down from her performance last year, when she consumed 38 to win the event for the first time.

This year marks Chestnut’s ninth win in the event. The 32-year-old Californian had won eight Mustard Belts in a row going into 2015, when he was defeated by Stonie. Chestnut also vowed to return in 2017 to defend the title for a 10th time.

In 2015, Chestnut ate 60 hot dogs, but Stonie pulled ahead with 62. Though disappointed, Chestnut said he was happy to have the competition. “I’ve been looking for competition for a long time and I finally have it,” Chestnut said at the time. “He made me hungry.”

Chestnut also holds several other records in competitive eating. In 2013, he consumed 13.76 pounds of pork rib meat in 12 minutes at the Best in the West Nugget Rib Cook-Off.

He also ate 141 hard-boiled eggs in 8 minutes that same year in Kentucky.

From “The Simpsons” to “Homeland,” TheWrap helps you pick day-long marathons viewing this Independence Day

As the 4th of July rolls around, what better way to celebrate American independence than by watching marathons of your favorite shows and fireworks displays on TV? Lucky for you, TheWrap has you covered!