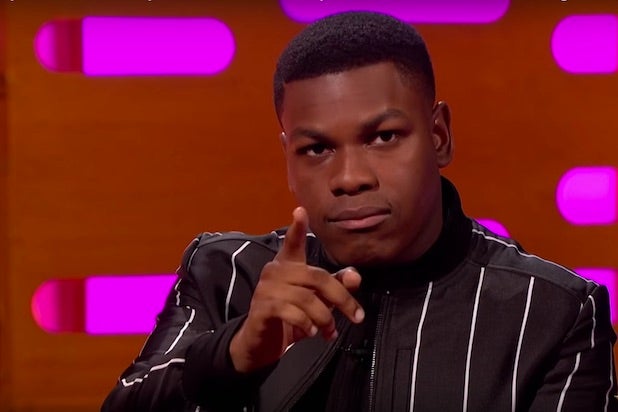 The actor, who played Finn in 2015’s “The Force Awakens,” 2017’s “The Last Jedi” and 2019’s “Rise of Skywalker,” posted a video on his Instagram account Friday of the many critical social media posts he’s received, some of which are downright offensive. Many of the posts were in reference to “Reylo” — the relationship between Rey (Daisy Ridley) and Kylo (Adam Driver) — which Boyega playfully mocked via Twitter on New Year’s Eve.

The offensive posts were edited into various interviews that he’s done showing off his dance moves and stunt training. Boyega literally slaps, kicks and even pelvic thrusts the haters’ words away.

Later, he’s seen slicing a tweet with a lightsaber, running over another with an e-scooter and even delivering a flying punch to a third.

“I got that out of my system,” Boyega says at the end of the montage. That sentiment is also echoed in his Instagram caption with a laughing emoji.

In a December interview with Variety, Boyega was asked about his perspective on navigating social media reaction with regard to the “Star Wars” films, to which he replied, “you are weak to believe in every single thing that you read.”

Some people took his comments to be a veiled criticism of costar Kelly Marie Tran, who was driven off Instagram due to the intense amount of harassment she received for being the first non-white woman to hold a major role in a “Star Wars” film. Boyega later apologized for his interview comments, saying they were “badly worded.”

Boyega has himself been critical of the franchise, describing Finn’s arc in “The Last Jedi” — where he is separated from the rest of the cast — as “a bit iffy.”

With the conclusion of the “Skywalker Saga,” Boyega does not plan to reprise his character, telling MTV News, “Honestly, the bottom of my heart, I don’t think I am [coming back]. I don’t think I am. I really do feel that way. This really is that movie, I think everyone doesn’t believe it, but this is that war that just ends everything.”