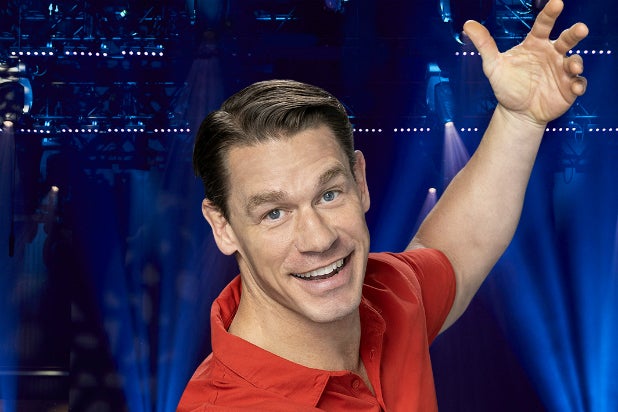 Although the $100,000 prize money is pretty sweet, that’s not the focus of Nickelodeon’s revival of “Are You Smarter Than a 5th Grader,” host John Cena tells TheWrap.

Unlike Fox’s original series where the spotlight was on the adults winning the jackpot, Nick’s version is all about the kids.

“On the original show, a lot of the stress was placed on the contestants’ shoulders. It was dramatic in terms of ‘will they win the big prize or not?’ There’s still big prize money — this is the biggest Nickelodeon has ever given away — but the show is about the kids,” Cena said of the revival that premieres Monday at 7 p.m. ET/PT on Nickelodeon.

Also Read: John Cena Learns How to Pageant Walk on 'Are You Smarter Than a 5th Grader' (Exclusive Video)

“We have more kids and we’re not afraid to showcase their talents. The show is about creating a fun environment to see who they really are, and in the process, we really learn a few things and have fun,” he told TheWrap.

“The adults can win up to $100,000 if they ace the fifth grade, which is very, very difficult. It is still a game show but even when the contestants reach a struggling point, everyone on the show has a great time.”

Entertaining young audiences is something the longtime WWE Superstar knows a lot about, and it was that mutual endgame that first attracted him to Nickelodeon. “At their upfront presentation, they said their goal is to put smiles on people’s faces, which is what we constantly say at WWE,” Cena explained.

While the original version of the show embarrassed the adults if they were beaten by the fifth graders, Nickelodeon’s revival takes a more positive tone.

“Every time we hit a precipice of someone doing badly or getting a wrong answer, I stress that the show is not about right answers. It is about learning — and a lot of our learning is done through our failure, that is where a lot of our growth comes from. I’ve had moments in the show where a fifth grader will get a question wrong and I can see them thinking ‘I’ve let you all down.’

“I tell them, ‘I bet you won’t forget it now.’ Learning sometimes is tough and you learn a lot through failure and from that uncomfortable place. That is a great message to send to kids and parents.”

According to the official description from Nickelodeon, “Are You Smarter Than a 5th Grader” contestants must revisit the classroom to answer six questions on a variety of subjects from the first through fourth grade, before moving on to the final round where they must race against the clock to answer five questions taken from the fifth grade. Each time the contestants answer questions correctly, their bank increases with a possible winning of $100,000. Newly-added elements to the show include an additional “cheat” option and new ways contestants can enlist the help of their grade-school classmates.

Taking on a new hosting gig means that Cena will be spending far less time in the WWE ring moving forward. “It doesn’t mean that my heart doesn’t lie with WWE, I’ve often said that if I’m doing something like this then it’s impossible to do something like that,” he said. “I’m older now, I just turned 42. I watch WWE on a regular basis and the talent is getting faster and more precise, and I’ve always been referred to as ‘unorthodox’ so I’m not exactly the most precise,” he added, stressing that the WWE is doing just fine without him.

“They don’t need me, I am grateful for everyone who says ‘we miss you,’ and there was a time when I could genuinely say from a financial standpoint that they needed me, that time is up.”

Where you will see more of the “Smackdown” superstar is on the big screen. On Friday, Cena confirmed on Twitter that he is joining the cast of “Fast & Furious 9” opposite franchise veterans Vin Diesel and Michelle Rodriguez.

Before the casting became official, Cena told TheWrap how much he hoped the deal would come through.

“It is a tremendous, globally-successful franchise … it has been built around cars, which I love,” he said. “I would be put around people that are better than me … I could really be a sponge and it’s a huge opportunity for growth. I always say that if you’re the smartest guy in the room then you’re in the wrong room. I would really love the chance and I promise that if I do get the chance, I will do my best.”

Also Read: Nickelodeon to Revive 'Are You Smarter Than a 5th Grader' With New Host John Cena

Speculation has also been rampant that Cena will join the cast of the “Suicide Squad” sequel, which he could neither confirm nor deny, but said that it “would be a tremendous opportunity for growth.”

“You have to get everything buttoned up before you can make it official, I don’t want to say anything … I will just say that if that opportunity presents itself, then I will be very grateful to take it,” he said.

The all-new @AreYouSmarter premieres TOMORROW – get ready to have your MIND. BLOWN. Don’t miss it June 10 at 7/6c on @Nickelodeon! #AreYouSmarter ???? pic.twitter.com/qLz1AabPPL