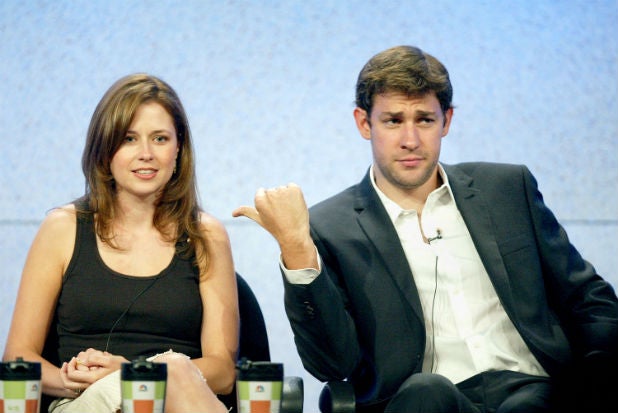 John Krasinski and Jenna Fischer were one of TV’s most beloved couples on “The Office,” but all’s fair in love and hockey as their teams faced each other in the Stanley Cups Finals Game 7 on Wednesday night.

Boston-born Krasinski had a special message to St. Louis fan Fischer in an Instagram video posted just before the puck dropped at the TD Garden.

“Jenna Fischer, I know we’ve been having our ups and downs recently but I am really sorry you’re not here … this was your seat here and I was really bummed you couldn’t make it,” Krasinski said in the video from his luxury suite.

“Let’s just have the best team win, both teams have been playing incredibly well, it’s an exciting series and at the end of the day, it’s about hockey and hockey fans,” he pledged, before flashing an evil grin.

It all sounded sincere enough, but during the filming a familiar face sat down next to Krasinski … yep, that is Roy Anderson (David Denman), the man Pam Beesly was engaged to when she first met Jim.

The guys seem to have made up since the Dunder Mifflin love triangle, but it didn’t sit well with other “Office” alum. “Whaaaaaaaat the effing whaaaaaat?!!?” Angela Kinsey wrote in the comments.

At least Fischer found it funny, reposting with the response: “Ha. Ha. Ha. Well played. Just be careful he doesn’t leave you at the game.”

Earlier on Wednesday, Fischer posted a doctored photo of the former on-screen couple in their respective team jerseys with the caption: “It all comes down to tonight … Game 7.”

Also Read: 6 Movies and TV Shows Inspired by Gangster Whitey Bulger, From 'The Departed' to 'The Blacklist' (Photos)

Krasinski came right back at her by recruiting Massachusetts native Steve Carell over onto his side.

The saga continues …. as does Game 7, which is currently airing on NBC.