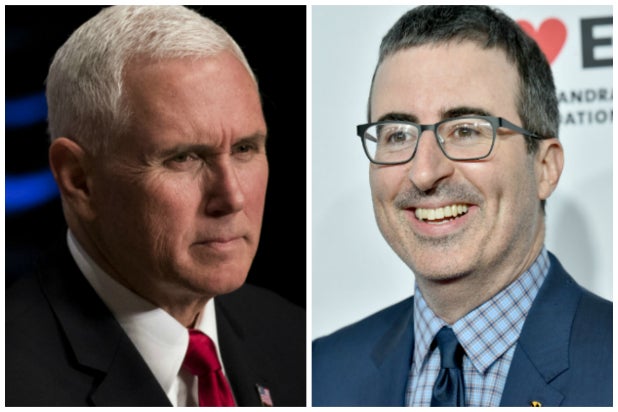 In the battle of the bunny books, John Oliver is the clear winner.

The family of Vice President Mike Pence released a children’s book on Monday written from the perspective of the family’s pet rabbit, Marlon Bundo. Unfortunately for the nation’s second family, the HBO personality released his own version on Sunday. Oliver’s features a gay Bundo, by the way, and its sales and reviews are kicking the carrots out of Karen Pence’s publication.

The “Last Week Tonight” host’s “A Day in the Life of Marlon Bundo” is currently No. 1 in audiobooks on Amazon, and it boasts a five-star rating. Its Kindle version tops all of Political Fiction and the hardcover is just straight-up No. 1 in Books.

Yeah, that’s about as big as it gets on Jeff Bezos’ online marketplace.

With 761 customer reviews counted at the time of this writing, Oliver’s real book for kids received 97 percent five stars, with 1 percent four stars, and 2 percent one star. Here is it’s official description:

HBO’s Emmy-winning “Last Week Tonight with John Oliver” presents a picture book about a Very Special boy bunny who falls in love with another boy bunny.

Meet Marlon Bundo, a lonely bunny who lives with his Grampa, Mike Pence – the Vice President of the United States. But on this Very Special Day, Marlon’s life is about to change forever…

With its message of tolerance and advocacy, this charming children’s book explores issues of same sex marriage and democracy. Sweet, funny, and beautifully illustrated, this book is dedicated to every bunny who has ever felt different.

The “Last Week Tonight” title is donating all of its sales to the Trevor Project, a charity to prevent suicide among LGBT youth.

Meanwhile, the Pence family’s “Marlon Bundo’s Day in the Life of the Vice President” is averaging just one star in Amazon user ratings. With only 27 customer reviews counted, 96 percent five the worst-possible rating and 4 percent gave it the best.

The hardcover version is No. 1 in “Children’s Rabbit Books,” which is apparently a measured category. The Kindle version holds no noted ranking. Here is the book’s description.

From the moment he hopped into the home of America’s “Second Family,” black-and-white bunny rabbit Marlon Bundo captured the hearts of Vice President Mike Pence, his wife Karen, and his children Michael, Charlotte, and Audrey. But little Marlon Bundo isn’t just a family pet: like Peter Rabbit and Bugs Bunny before him, Marlon–or BOTUS (Bunny of the United States)–is a national celebrity! With his appearances at official White House events, his rides on Air Force 2, and his popular Instagram account, Marlon Bundo has become a beloved member of the Trump-Pence administration.

So how does a bunny experience a day in the life of the Vice President? Now young readers can follow Marlon Bundo along as he hops after “Grampa” (Vice President Mike Pence) in this delightful story penned by Charlotte Pence and illustrated faithfully with watercolors from the “Second Lady” herself, Karen Pence.