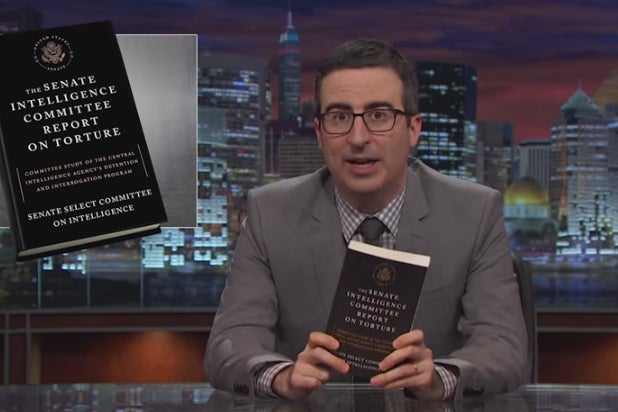 Looking for a terrible beach read this summer? Try “The Senate Intelligence Committee Report on Torture,” a 500-page summary of the group’s much longer classified report on the C.I.A.’s Detention and Interrogation Program, John Oliver suggested Sunday.

The HBO host took on the serious topic of torture it chronicles in a 15-minute segment last night, but he still managed to squeeze in a bunch of jokes. For instance, below is one comparing the super boring read to Bill Cosby‘s memoir, “Time Flies.”

“You know when time really flies? When you lose consciousness for three hours and wake up in Bill Cosby‘s limo,” Oliver cracked.

The comic also managed to sneak in a Bud Light Lime joke and a solid Rachel Dolezal quip during the heavy segment.

In an attempt to make the wordy, boring available chunk of the report palatable, Oliver enlisted Dame Helen Mirren to record an audio version. Her soothing voice certainly helped, but the actual details of the C.I.A.’s tactics will still have viewers squirming in their seats.

The actress then took a break from breathing life into the torture manual to read “The Tale of Peter Rabbit” — though even the children’s book script was suddenly infused with rectal rehydration for the titular bunny. Don’t read that version to your kids tonight.

Finally, Oliver and his producers asked all 14 declared presidential candidates if they’d upload President Obama’s Executive Order ban on torture, which essentially expires when he leaves office next year. Four runners said yes, 10 did not respond. The former “Daily Show” correspondent would put the screws to that silent majority, but after all of this, he has no belief that torture actually works.