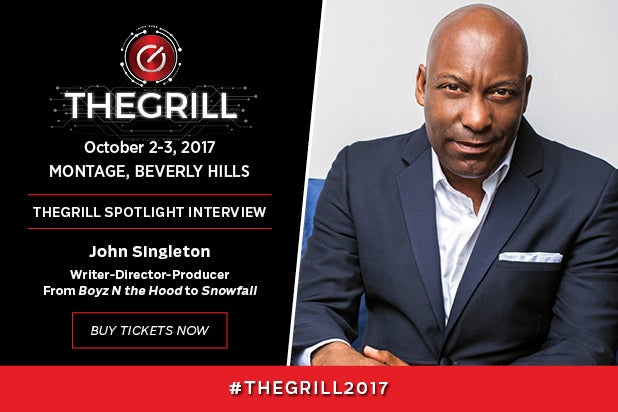 Writer, producer and director John Singleton has joined the outstanding lineup of speakers at TheGrill 2017 conference.

The eighth annual leadership conference, to be held on October 2-3 at the Montage Beverly Hills, will feature a spotlight interview with Singleton sharing his insights on the impact of his filmmaking on American culture, from “Boyz N the Hood” to “Snowfall.”

In 1991, John Singleton blew Hollywood away and opened America’s eyes with “Boyz N the Hood,” a powerful, sensitive and insightful look at life on the streets of South Central L.A.

This year, he went back to L.A. with “Snowfall,” FX’s deep-dive series exploring the rise of crack in the 1980s. In between, he has expanded the scope and imagination of screen storytelling with films ranging from “Rosewood” to “Poetic Justice,” and action hits like “Four Brothers” and “2 Fast 2 Furious.”

And he has elicited unforgettable performances from cultural icons including Janet Jackson, Tupac Shakur and Ice Cube. Last year he reunited with “Boyz N the Hood” star Cuba Gooding Jr. to direct the most shocking episode of FX’s acclaimed “The People v OJ Simpson” — an episode all the more incredible because it stayed so close to the facts.

TheGrill leads the conversation on convergence between entertainment, media and technology, bringing together newsmakers to debate the challenges and opportunities facing content in the digital age.

Diverse programming anchored by versatile talent and supported by big brands has always been the hallmark of Hollywood.