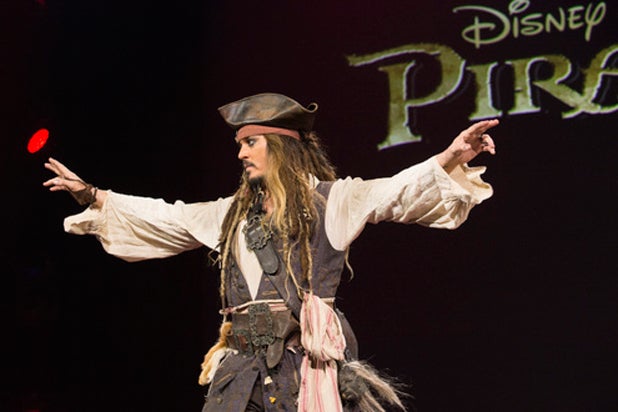 Disney gave fans a sneak peek at its live-action musical “Beauty and the Beast” before Johnny Depp took the stage as Captain Jack Sparrow to introduce “Pirates of the Caribbean: Dead Men Tell No Tales.”

Disney’s Sean Bailey said “Beauty and the Beast” has one of Disney’s “best casts ever” and that it will feature two new great songs from Alan Menken, who was responsible for the music from Disney’s 1991 animated classic. He’ll once again be working with lyricist Tim Rice.

Star Emma Watson sent in a video for fans that set up another video featuring Luke Evans’ Gaston and Josh Gad’s Le Fou singing “Gaston,” a classic song from the film.

This tale as old as time won’t hit theaters until March 2017.

Before the presentation ended, Bailey confirmed that Orlando Bloom’s Will Turner will return in the new “Pirates” movie after sitting out the last installment.

Disney’s Alan Horn said he was thrilled to have Watson as Belle and to be working with her again after the “Harry Potter” franchise.

He relayed a story about meeting her when she was just 10 years old. They brought in four Harry Potters and then director Chris Columbus brought in one Hermione. “I said, ‘In a kingdom of 60 million people, you can only find one kid between the ages of 10-13 who can play Hermione?'” Horn recalled. “And he said, ‘Just watch this kid.’ Well, look at her now..”

Take a look at the title art for the new “Pirates of the Caribbean” movie below.

Will Turner is back for Pirates of the Caribbean: #DeadMenTellNoTales. #D23EXPO pic.twitter.com/94AYYVsrji