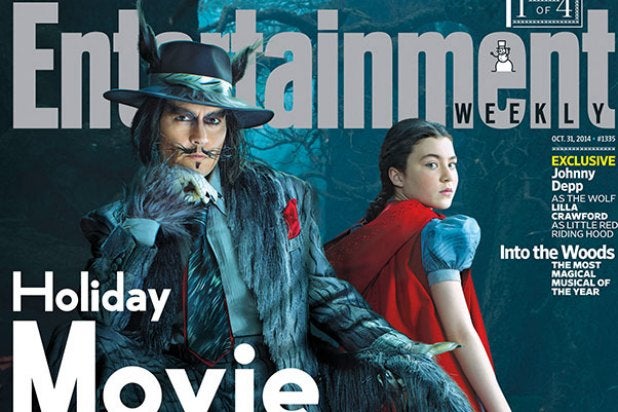 The A-list cast of Disney’s upcoming movie “Into the Woods” is gracing four covers of Entertainment Weekly, decked out in their full costumes from the film.

See photos: 16 Actor Replacements That Worked – Can ‘Fifty Shades’ Pull it Off Too?

Gracing one cover is the first full look fans have gotten of Johnny Depp as the Big Bad Wolf, dressed in a zoot suit and fedora that comes with two holes for his furry ears to stick out of. Standing next to him is Red Riding Hood, played by Lilla Crawford.

“I’ve been offered many witches over the years, starting when I was 40, and I said no to all of them,” the Oscar-winner said of her new role. “But this was really fun because it played with the notion of what witches mean. They represented age and ugliness and scary powers we don’t understand. So here’s my opportunity to say, here’s what you wish for when you’re getting old.”

Getting covers of their own are Anna Kendrick and Chris Pine, who play Cinderella and Prince her Prince. Emily Blunt and James Corden are featured in the final cover, playing the Baker and the Baker’s Wife.

“Into the Woods,” directed by Rob Marshall, is due in theaters Christmas Day.

See all of the “Into the Woods” covers below.