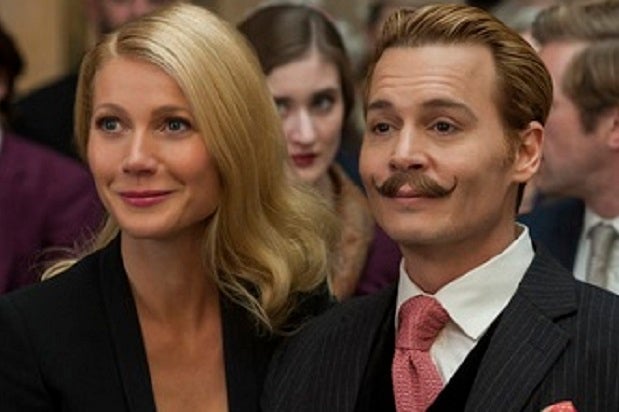 Add the “Mortdecai” mustache to the lengthening list of costume gimmicks that have failed to connect for Johnny Depp at the box office lately.

The wacky whiskers he wore as a shady art dealer in “Mortdecai” — the subject of a a national pre-release promo campaign — couldn’t prevent Lionsgate Entertainment’s caper comedy from landing with a major thud and taking in a puny $1.4 million in its nationwide opening Friday.

That means that “Mortdecai” will finish the weekend with less than $5 million, or about half of the studio and analysts’ expectations, which were low to begin with.

Now the ‘stache is in league with the disembodied brain of “Transcendence,” Tonto’s floppy feathers in “The Lone Ranger” and Barnabas Collins’ fangs in “Dark Shadows.”

They all helped make memorable characters, but none could halt Depp’s box office skid, which began with his role as Hunter S. Thompson in 2011’s “The Rum Diaries” and hit five consecutive films on Friday.

Depp doesn’t deserve all the blame. Gwyneth Paltrow, Ewan McGregor and Olivia Munn co-starred in the David Koepp-directed “Mortdecai.” The critics eviscerated the comedy and have it at just 13 percent positive on Rotten Tomatoes. Friday’s opening day audiences bashed it too, and gave it a crummy “C+” CinemaScore.

Dressing up has served Depp well in the past: There was “Edward Scissorhands.” And he put on wacky makeup as Jack Sparrow for “Pirates of the Caribbean: On Stranger Tides,” which was a monster, taking in more than a billion dollars globally for Disney.

But that seems a long time ago for Depp, whose last five releases have opened to an average of $20 million dollars. The final haul for  “Mortdecai” isn’t known yet, but his last four films have on average topped out at just $51 million domestically. Given his previous blockbusters like “Pirates” and “Alice in Wonderland,” more has been expected of the high-profile actor whose celebrity cred remains A-list.

The weak opening is hardly the end of the world for Depp or Lionsgate.

The 51-year-old actor is rich and has another “Pirates” movie coming in 2017 for Disney. And Lionsgate is getting off relatively easily, since “Mortdecai” had a reasonable $40 million dollar production budget. That’s a lot less than the cost of Depp’s last three box-office belly flops, “Transcendence” ($100 million), “The Lone Ranger” ($225 million) and “Dark Shadows” ($150 million).

What we may be seeing is Depp’s evolution into a sort of super character-actor. There’s no question he can still create unique and memorable roles, but after five misses in a row, Hollywood studios and casting agents have to be wondering if he’s commercially viable as a leading man.