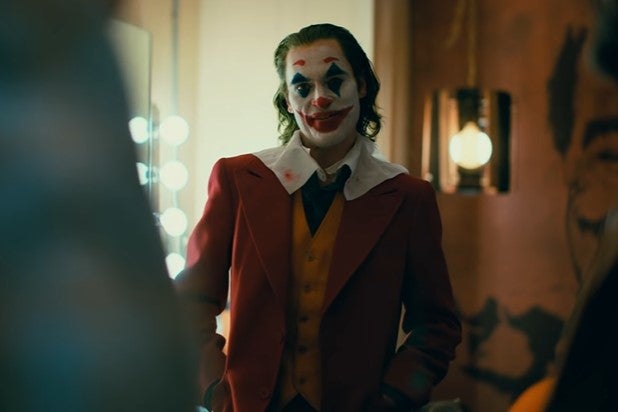 Warner Bros.’ “Joker” cannot be stopped at the box office. In its second weekend, the Village Roadshow/DC tragic drama will post a $55 million total, giving it a 10-day domestic total of $192.7 million.

It’s a remarkable hold for this R-Rated comic book movie, especially considering its bleak tone. But that hasn’t stopped casual moviegoers and hardcore comic book fans alike from embracing Joaquin Phoenix’s take on the Joker, as strong word of mouth from the film’s release is putting it on pace to pass “It: Chapter Two” as WB’s highest grossing 2019 release this coming week.

In the face of this competition, two new releases had different fates this weekend. United Artists/MGM’s seasonal animated film “The Addams Family” had a solid performance with $30.3 million grossed from 4,007 screens. The film had been projected for an opening of around $25 million.

But while it has performed above expectations this weekend, “Addams Family” will face major competition for family audiences from Disney’s “Maleficent: Mistress of Evil” next weekend. Word of mouth for “Addams” has been mixed with a B+ on CinemaScore and a 44% Rotten Tomatoes score.

In third this weekend is Paramount/Skydance’s “Gemini Man,” which cost $140 million to make but is only opening to around $20.5 million. Featuring Will Smith as a younger version of himself through CGI, “Gemini Man” is the second straight film directed by Ang Lee to struggle at the box office despite boasting groundbreaking movie technology. Audience reception was solid with a B+ on CinemaScore and a 3.5/5 on Postrak, but critics panned it with a 27% RT score.

Lee’s previous film, “Billy Lynn’s Long Halftime Walk,” bombed with just $30 million grossed against a $40 million budget. To avoid a similar fate, “Gemini Man” will have to rely on strong overseas numbers, particularly in China, where Lee is one of the nation’s most recognized filmmakers. The film grossed $31 million from 58 markets this weekend for a global total of $59 million, with a release in China coming next weekend.