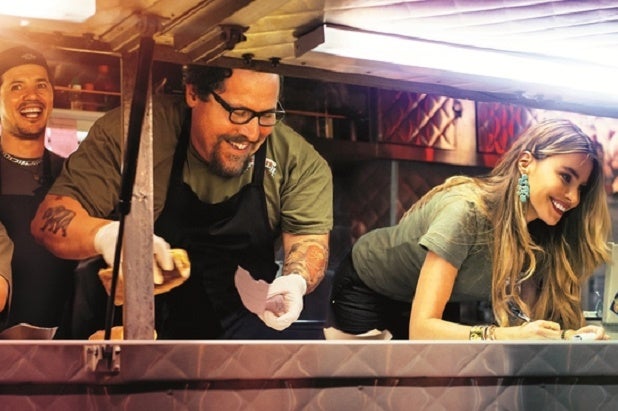 Sofia Vergara and John Leguizamo co-star in the well-reviewed “Chef,” which is at 87 percent positive on Rotten Tomatoes, and also features Oliver Platt, Robert Downey Jr. and Dustin Hoffman.

Exit polls were strong according to Open Road, and “Chef” will expand to about 10 cities next weekend and beyond that on May 23.

Also getting off to a fast start was “Palo Alto.”

The drama based on star James Franco’s short story collection and directed and adapted by Gia Coppola opened in four theaters in New York and Los Angeles and brought in $80,640 for Tribeca Films, a $20,160 per-screen average. Emma Roberts co-stars.

Tribeca said Sunday that the plan is to expand to five additional markets next weekend, taking on an additional 15-20 select runs.

“Belle,” the period drama about about a mixed-race woman in aristocratic England, did well in its expansion for Fox Searchlight. It added 41 theaters and nine new markets and brought in $473,000 from 45 locations for a $10,050 per-screen average. That ups its domestic total after 10 days to $620,000.

Fox Searchlight said Sunday that it will take “Belle” into 22 more new markets as well as expanding in the already opened cities to bring the theater count to between 150 and 170 locations next weekend.

The film was directed by Amma Assante and stars Gugu Mbuthu-Raw in the title role. Tom Wilkinson, Emily Watson, Penelope Wilton, and Sarah Gadon also star in the film, which was produced by Damian Jones.

The Polish drama “Ida” had a strong second week, too.

Music Box’s Pawel Pawlikowski-directed tale of young novice nun coming to grips with her family’s past went from three to seven theaters and brought in $104,000, a $14,857 per-screen average. Agata Kulesza stars.