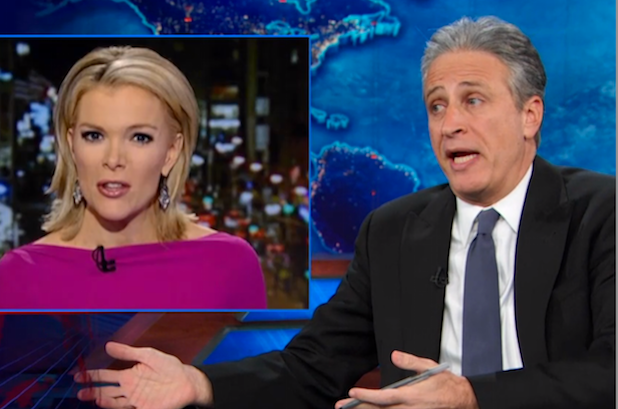 Jon Stewart has a new favorite target, and it’s come with a Christmas bow around it.

“The Daily Show” host continued to skewer Megyn Kelly on Monday’s program for assertions the Fox News anchor made last week that Santa Claus is white.

The statement about a fictional character’s race came as Kelly was hosting a discussion comprised of all-white panelists about a Slate.com blogger’s opinion piece that argued that depictions of St. Nick as white can be alienating to children of other races.

“Like most debates, it started by giving you the definitive answer first,” Stewart said.

Many Americans disagreed with Kelly’s conclusions.

But Kelly hit back at her critics on Friday, saying the segment was intended to be humorous and arguing that her critics were humorless pot-shot takers who saw a convenient target in Fox News.

“I guess we all owe you an apology,” Stewart said. “What appeared to me to be another example of a Fox News segment expressing anger and victimization over the loss of absolute power and reframing that as persecution of ‘real America’ by minorities, freeloaders, and socialists — that’s trademarked, by the way. What I thought was that was a jest, a jape, a bit of wise-crackery.”