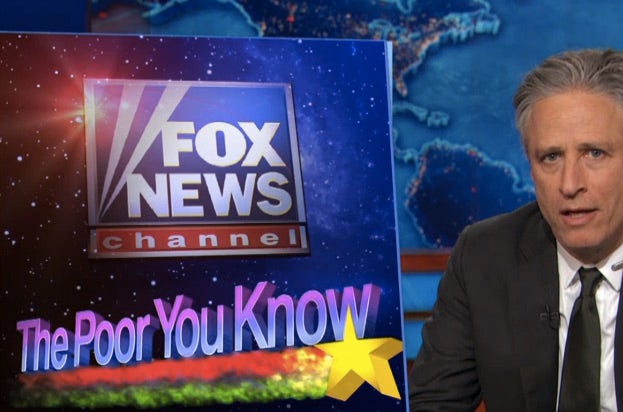 Jon Stewart took aim at Fox News again on Wednesday, hitting his favorite target for its hypocrisy when it comes to poverty.

The “Daily Show” host played clips of Fox News hosts recently saying President Obama doesn’t talk about poverty enough. He then showed a clip of a recent talk the President had on poverty.

But Fox didn’t credit the president, Stewart pointed out. Instead, they highlighted the fact that he said Fox News tries to make the poor look bad on its air.

“It sounds to me the president has a remarkably firm grasp on your business model, Fox, so why are you outraged?” Stewart asked.

He then rolled a series of clips of Fox News calling the poor takers, freeloaders and entitled: “We have nothing against the poor, it’s just their ravenous greed burst through America’s chest like the monster in ‘Alien,'” Stewart railed.