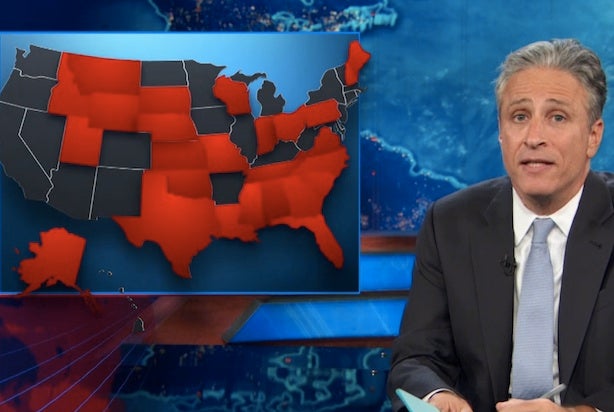 Jon Stewart slammed the 26 states refusing to accept Medicaid expansion to millions of low income Americans over their opposition to the Affordable Care Act on Thursday’s edition of “The Daily Show,” calling them moochers.

As evidence, he noted that all but three of those states take more money from the federal government than they contribute in tax dollars.

“They are already burdens on the system,” Stewart said. “I believe they’re referred to by those Republicans as moochers. Moocher states. And if statehood was healthcare, Mississippi and Missouri would be rejected as having that as a pre-existing condition.”

He implied that states like Mississippi and Texas are refusing to expand their programs because their Republican controlled governments despise President Obama.

With a sardonic tone, Stewart than took viewers through a tour of the intricacies and insanities of the modern healthcare system. He also used the opportunity to take a swipe at former Republican standard-bearer Mitt Romney for saying that uninsured people do get treated for medical problems when they visit emergency rooms.

“You can always go to the emergency room when you’re having a heart attack,” Stewart said. “And apparently they think that’s the fiscally responsible option rather than expanding Medicaid, because unlike Obamacare, we all know ER visits are free.”

But of course the cost of treating uninsured customers gets passed on to paying customers, which raises health insurance rates and makes it more difficult for people to get coverage, Stewart noted.