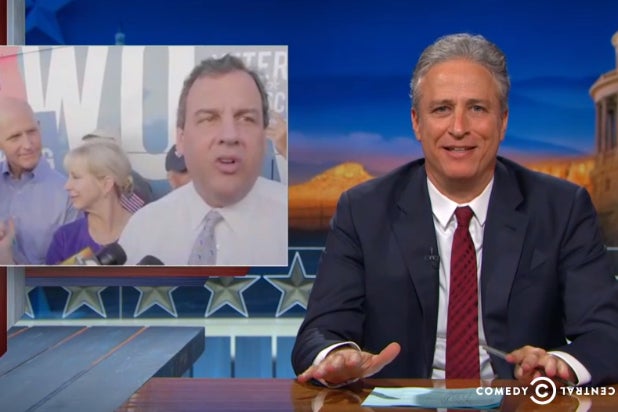 “The Daily Show” headed from New York City to Texas at the same time that the Ebola virus is making the exact opposite migration, a fact not lost on “The Best F#@king News Team Ever.”

“Now that Ebola is in New York City, we can let the big dogs show you how we handle an African blood-poop virus,” host Jon Stewart started from his remote week in Austin, Texas.

He added, “Calm, cool and … catch that doctor and kill him!” referring to the now-infamous jogging and bowling Manhattan Ebola practitioner/patient, Craig Spencer.

Also read: Fox News’ Shepard Smith on Politics, Ebola and the ‘Monster’ Behind Him

Stewart then turned his ire towards one of his favorite political punching bags, New Jersey Governor Chris Christie, who imposed a mandatory 21-day quarantine in the Garden State.

“Why does Christie have to be such a dick about everything?” Stewart wondered aloud.

Later, the traveling Comedy Central comic took a page, cigarette and camera filter out of “The Twilight Zone,” suggesting that the real spreading virus is merely fear itself.