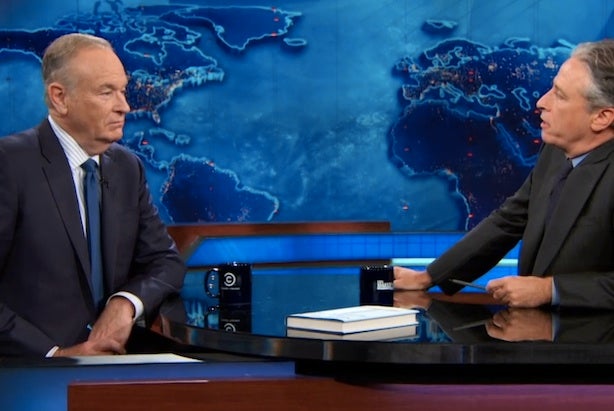 Bill O’Reilly stopped by “The Daily Show” to hawk “Killing Jesus,” the latest in his ongoing chronicles of when bloody things happen to important people.

But it wasn’t all book chat. The Fox News commentator also dove into President Obama’s handling of alleged human rights abuses in Syria and the government shutdown.

Unsurprisingly, the libertarian O’Reilly and the liberal Jon Stewart differed on the standoff over Obamacare. O’Reilly said he felt the law should be amended so individuals could opt out of Obamacare, while Stewart argued that it should be enacted because it was passed in 2009.

“They got nothing,” Stewart said of House Republicans, labeling the situation “asinine.”

“They’re all pinheads, all of them,” O’Reilly said.

On the issue of Syria, Stewart praised the president for finding a diplomatic solution that offers Syrian President Bashar al-Assad a chance to hand over chemical weapons instead of being bombed, while O’Reilly claimed the president looked weak by backing away from his plans for a military strike.

“I don’t care if he put on a dress and lipstick and sashayed his pretty little ass around the White House and said ‘look at me, I am a beautiful little girl,'” Stewart said.