Viacom (VIAB) shares were slammed to the tune of $350 million on Wednesday after “The Daily Show” host Jon Stewart announced on Tuesday night that he would leave the Comedy Central news satire program sometime this year.

Shares closed Thursday at $67.71, up $0.55 (0.83 percent) intraday on expected weekend box-office strength from the corporation’s Paramount Pictures release “Spongebob Squarepants: Sponge out of Water,” but down 10.11 percent year to date.

“There is a generation of fans who would follow Jon Stewart probably anywhere,” Levinsohn told CNBC’s “Fast Money: Halftime Report” on Thursday. Levinsohn arrived at the amount by estimating 1 million subscribers paying $8 per month, plus advertising income and other revenue streams.

He went on to say, “If I was Viacom, I would back the truck up” to keep the Stewart at “The Daily Show.” Watch the video below or here. 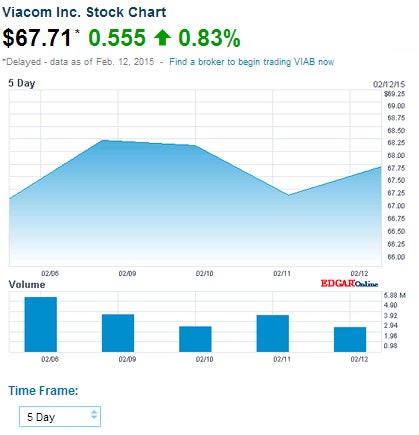