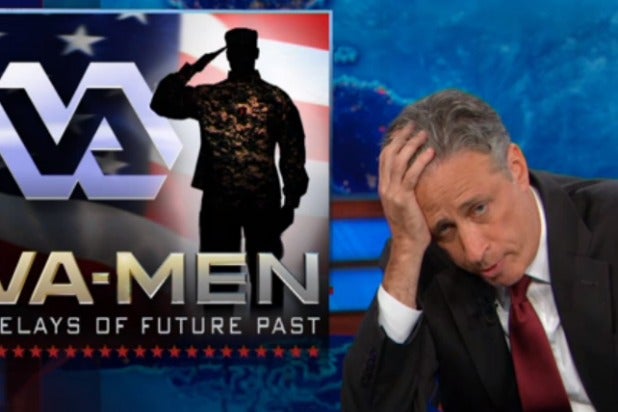 Jon Stewart lit into the Veterans Administration for using a 29-year-old scheduling system that appears to be a factor in long delays for veterans seeking medical treatment.

“It has not changed in any appreciable manner since that date,” Matkovsky said.

Stewart began listing the limitations of 1985 computers. (AMC’s new computer drama “Halt and Catch Fire” also looks at the computer industry in that time period: In Sunday’s episode, one character proposed trying to get a jump on competitors by selling a computer with a handle for carrying it.)

“Your system can’t process claims but it can print an all-text picture of Snoopy. 1985? Are you kidding me? Have you ever caught the movie ‘The Net’ on late-night cable and laughed out loud alone at how outdated the technology seems? That’s 10 years more advanced than what the VA is currently using.”

He noted that both Congress and the VA have failed to take action.

“If only there were some visual representation of how responsibility for this mess is batted back and forth between Congress and the VA,” Stewart said, “perhaps using technology the VA would be comfortable operating.”

And with that, he displayed a game of Pong.