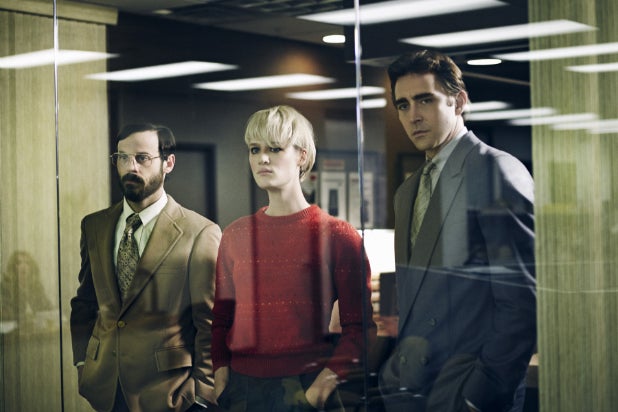 Yes, AMC is going strong with “The Walking Dead,” television’s highest-rated scripted show. But it’s lost some of its creative spark. The new “Turn” is a question mark with audiences. Shows like “The Killing” and “Low Winter Sun” stumbled. The network’s most anticipated shows are spinoffs of the existing hits “Breaking Bad” and “Walking Dead.”

See photos and video: ‘Halt and Catch Fire': They’ll Either Revolutionize the PC or Self-Destruct (Exclusive)

In another “Mad Men” similarity, the show opens with a definition explaining its punchy, poetic title. “Halt and Catch Fire” is a command that calls on every function of a computer to run at once and compete for dominance.

“The Battle for CTRL Begins,” says the show’s tagline. Don Draper would be impressed.

We meet the first of our leads and establish the setting in a perhaps too allegorical scene involving a sports car and an armadillo. Salesman Joe MacMillan (Lee Pace) has a Draper-like secret, but he’s not quite as good with clients. If it’s any consolation, he has better eyebrows.

Within five minutes, he’s met brusque, brilliant student Cameron Howe (Mackenzie Davis), whose post-punk haircut is even better than his eyebrows. He’s cool and mechanical, she’s a guarded force of nature. Sports car, meet armadillo? Maybe. They have extremely casual sex, because it’s 1983, and heterosexuals aren’t yet wise to AIDS.

After a gorgeous opening credit sequence, we meet Gordon Clark (Scoot McNairy). He doesn’t have especially good eyebrows or hair, but he may be the most compelling character on the show.

Joe is a free-ranging and raging bachelor, who spends nights alone in his sleek, dark apartment knocking baseballs into the window. Cameron’s personal life, besides playing arcade games, is a mystery so far. But Gordon’s is painfully familiar: He’s a man neutered by domesticity, who’s given up his dreams of creating a new kind of computer to struggle with his wife to raise their daughters.

In one refreshing update on the “Mad Men” era, his wife isn’t a partner in appearances only. And she isn’t the dream-crushing shrew so many failures conveniently imagine their wives to be. Donna Gordon (Kerry Bishe) once built a computer with her husband. She works at Texas Instruments. Besides being tech-savvy, she does more than her share of the work at home. With Gordon checked out, she’s holding the family together.

When Joe stalks Gordon to “Return of the Jedi” to get him to build a new computer, we understand what’s at stake. Gordon may tell himself that his family is keeping him from his dreams, but he’s a deeply depressed mess. They’re keeping him alive. He’s living out the dilemma of everyone who wonders whether to settle for the good thing they have, or risk it for what could be greatness.

After some legal maneuvering that makes “Mad Men” look quaint, Cameron joins Joe and Gordon. And so begins their battle for her soul.

Writers and co-executive producers Christopher Cantwell and Christopher C. Rogers seem determined, like their protagonists, to do something new. Cantwell has a few credits, but this appears to be the first for Rogers. That makes what they’ve accomplished with their pilot all the more impressive.

The show nostalgizes the ’80s in ways we wouldn’t expect: The music is spectacular, but free of the Top 40 songs we all know. The opening titles, somewhat reminiscent of the original “Tron,” are chillingly forbidding and beautiful at once. They conjure an aesthetic that still feels futuristic today. And all of the acting is outstanding. No one delivers big speeches. But when they do speak, their words feel as precise and efficient as lines of code.

“Halt and Catch Fire” premieres at 10/9c Sunday on AMC.