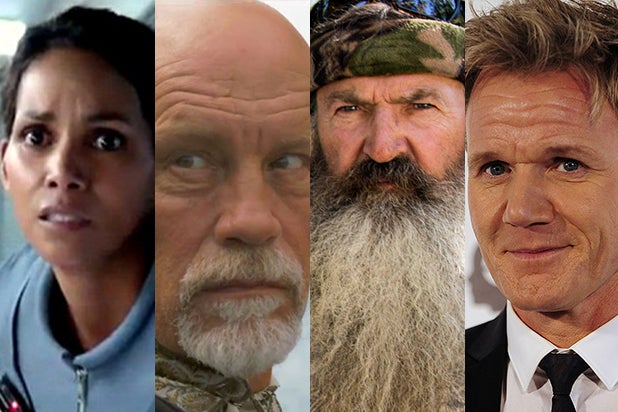 Summer is suddenly sizzling on TV.

Once it was the season of reruns. But networks are pledging to program year-round, and that means airing new shows in the dog days that might have debuted in the fall.

You can tell a lot about the strength of a network’s schedule overall by what it airs in the formerly slow months. All of the networks are taking big swings. Here are some burning questionsfrom TheWrap‘s TV team about which of those swings will connect.

1. Has Duck Dynasty Lost Its Quack?
A&E’s hit reality show “Duck Dynasty” found itself in a rare position in January — on the decline. The fifth season premiere of the series drew 8.5 million total viewers — an impressive number, until you consider that the previous season’s premiere amassed 11.8 million. The following week’s episode shed almost another 2 million viewers, and the season finale was down 2.4 million viewers compared to the Season 4 finale.

It’s unclear if the decline resulted from Phil Robertson’s anti-gay remarks. (A groundswell of support got him un-suspended from the show after a week.) With the scandal a bit further in the rear view, it will be interesting to see how “Duck Dynasty” performs in its Season 6 premiere on June 11.

2. Can ABC Finally Break Through With a Singing Competition?
“Rising Star,” hosted by Josh Groban and featuring experts Brad Paisley, Kesha and Ludacris, premieres June 22.
Based on a successful Israeli format, “Rising Star” includes heavy audience participation and real-time results. But singing competitions have been hitting a low note with viewers lately. The days of runaway ratings for “American Idol” are over, and ABC hasn’t had the best luck with music. Last summer’s “Duets” died on the vine despite the presence of Kelly Clarkson and Robin Thicke.

3. Is ABC Settling?
ABC dramas like “Motive” and “Rookie Blue” may pull a few million viewers, but why settle when CBS’s “Under the Dome” proved that a summer show can be a bona fide hit?

4. Can “Halt and Catch Fire” Catch Fire?
With “Breaking Bad” a distant (but never dim) memory and “Mad Men” drawing to a close after this season, AMC is faced with the prospect of developing a new batch of shows that will grab viewers’ attention. Last year’s “Low Winter Sun” was a no-go, and the verdict is still out on this year’s Revolutionary War-era spy drama “Turn.”

Enter “Halt and Catch Fire,” the network’s new drama about renegades at the dawn of the PC era in the early ’80s (premiering June 1). The first episode of the series, which stars Lee Pace as a devil-may-care computer salesman and Scoot McNairy as an engineer in the midst of a personal crisis, manages to draw megabytes of drama out of miles of computer code. The question is whether it can maintain it.

5. Can “Extant” Duplicate the Success of “Under the Dome”?
CBS made a bold move last year by rolling out the ambitious Stephen King drama “Under the Dome” in the summer. It was a hit, and the network is making a similar move with the Halle Berry drama “Extant” (premiering July 9). Berry plays an astronaut who mysteriously returns pregnant from a 13-month solo space mission — and whose Earth son is part of an artificial intelligence program. (Like “Under the Dome,” the series counts Steven Spielberg among its executive producers.)

6. Can “Under the Dome” Duplicate the Success of “Under the Dome”?
It will be interesting to see if the show can again catch lightning in a dome when it returns June 30.  The series has, after all, surpassed the scope of the Stephen King novel that served as its source material. And how much drama can you draw from a series that’s defined by a giant invisible barrier?

During a recent press gathering, executive producer Neal Baer explained how the show will advance past its first season, introducing a clash between science and faith. And the Big Jim character (played by “Breaking Bad” alum Dean Norris), will suddenly take a kinder, gentler approach toward protecting and serving Chester Mill. Will viewers embrace change, too?

7. How many episodes will “Riot” run before getting pushed off the 22-degree stage?
Steve Carrell’s new improv-on-a-slanted-platform show was a big ratings bust, debuting to a 0.5 last week for Fox. Insiders tell TheWrap that they’re not sure how long it will last. The 0.7 debut for “I Wanna Marry Harry” was a disappointment as well, and the dating show slipped in its second week.

8. How much Gordon Ramsey is too much?
Ramsey has another two shows coming back on Fox — “MasterChef” and “Hotel Hell” — and that’s just this summer. At this point, is Fox risking burnout for its other Ramsey projects? Also, all that yelling and risotto can’t be good for Ramsey’s health.

9. Can we please just make it to football and “Gotham” season?
Seriously, Fox is probably counting the calendar days down until kick-off and its highly anticipated “Gotham” prequel. The network has a few other potential hits up its sleeve for the fall — Fox folks are excited for “Red Band Society — and probably can’t bring back “Sleepy Hollow” soon enough. At least the summer has perennial Emmy contender “So You Think You Can Dance?”

10. Is “Welcome to Sweden” any good?
It’s Amy Poehler’s NBC project with her brother, Greg, based on his own move to be with a Swedish woman. Amy Poehler’s comic credentials couldn’t be more solid, but Greg Poehler is new to most Americans. Though the show is a success in Sweden, it remains to be seen how it will play in America.

11. Is “Crossbones” worth the wait?
The British-American series, starring John Malkovich as Blackbeard, could be compulsively watchable. It debuts Friday May 30 and comes from “Luther” creator Neil Cross. And Malkovich is Malkovich. But the long wait for the series, originally scheduled for midseason, could be a red flag. Or even a flag bearing a skull and you-know-what.

12. Can NBC hold onto No. 1 in the key demo through the dog days?
NBC has prided itself on year-round programming, even in seasons when it lagged in the key 18-49 demographic during the traditional September to May calendar. This time, it won in that demo during the regular season. But it faces stiff competition in the hot months: Competitors are rolling out some big guns, like Fox’s “24: Live Another Day” and CBS’s “Extant” and “Under the Dome.”

13. Will FX’s “The Strain” Overcome Vampire Fatigue?
NBC’s “Dracula” was one of this season’s casualties, getting the ax after one season and indicating that, just maybe, viewers are beginning to cool off on bloodsuckers. FX’s “The Strain,” which debuts July 13, will take another crack at the whole vampire bloodthirst. “The Strain” follows a team investigating a viral outbreak with hallmarks of an ancient strain of vampirism.” Guillermo del Toro co-created the series and directed the pilot.

14. How Long Can Netflix Get Away With Not Reporting Viewer Numbers?
The upcoming second season of “Orange Is the New Black” is one of the most anticipated returns of the summer, due in part to Netflix’s insistence that the show is a hit. Other network heads have taunted Netflix for not revealing how many people actually watch its shows, but Netflix answers only to its stockholders. Can anything force it to pull back the curtain?

15. Has the CW Grown Up and Given Up on Its Young Audience?
The network, which started out seeking women 18-34, is making gains in the 18-49 demographic. But what about its core viewers? When it starts airing “Penn and Teller” and trying to find more ways to milk “Whose Line Is It Anyway?” you have to wonder if its looking to switch audiences.