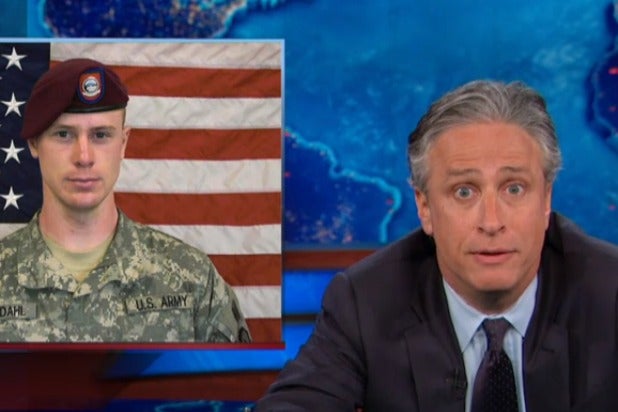 Jon Stewart says Fox News’ coverage of Sgt. Bowe Bergdahl’s release shows that the network is like the opposite of a conscience.

As Stewart showed on Monday’s “Daily Show,” various Fox News personalities have suggested the former POW might be a deserter, a traitor, a convert to Islam who wanted to wage jihad, and “flat-out anti-American.” Fox News Chief Washington correspondent James Rosen said Bergdahl was “in some respects a kind of modern-day Lee Harvey Oswald.”

“In just a few days, this guy Bowe Bergdahl went from ‘guy who left base without permission’ to ‘Muslim-terrorist-Kennedy-assassin,'” Stewart said.

“At one point, his father told him just before he went missing, he said, ‘obey your conscience,’ which kinda sounds to some as if, ‘yeah, whatever you want to do, go ahead,'” Steve Doocy, co-host of “Fox and Friends” said.

“It sounds that way to some — you know, specifically people who don’t know what a conscience is,” Stewart said. “If someone says listen to your conscience, they’re not saying ‘do whatever you want.’ Your conscience is the opposite of the thing that tells you to do whatever you want to do. Your id is the thing that enables your darkest impulses. Think of it as the Fox News of your brain.”