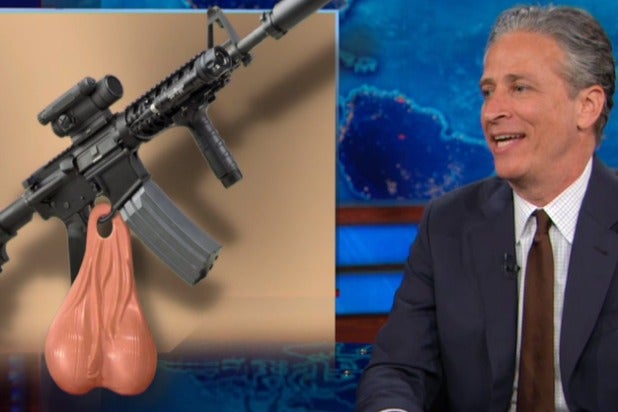 On Thursday’s “Daily Show,” Stewart mocked the NRA for its recent flip-flop on whether bringing firearms to dinner is “weird.” He said the NRA, which originally questioned the practice, had caved to open carry activists.

“Everyone’s scared of guns nuts. Even other gun nuts,” he said.

But then he started to worry about what would happen if someone brought a gun into a restaurant in a state with stand-your-ground laws allowing people who feel threatened to open fire.

“You have a right to carry a weapon,” he said. “That may cause a reasonable person to believe they are in danger of great bodily injury. And they have a right, if they feel that way, to respond with deadly force. It’s a perpetual violence machine. It’s gunfight at the Golden Corral.”

Then he came to a horrible realization: “Wait a minute — this isn’t an argument about freedom at all, is it? This whole thing’s a business plan for arms dealers.”