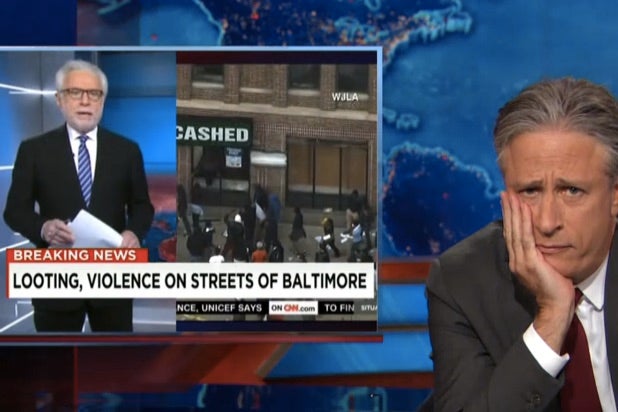 Jon Stewart took on the media Tuesday night for all of a sudden worrying about cities like Baltimore when buildings are on fire, but not on an everyday basis.

“Elvis leading a herd of orthodox Jewish unicorns through a city street–that would be hard to believe–this shit happens all the time,” Stewart said, spoofing sound bites of CNN’s Wolf Blitzer saying this reminded him of the civil rights protests and he hasn’t seen images like the ones coming from Baltimore in a long time.

He continued to recount the events of the last few days. He then pivoted to CNN focusing on whether the Mayor of Baltimore was too late in declaring a State of Emergency in Baltimore.

“Sure, they could have declared a State of Emergency in Baltimore on Sunday, maybe Saturday,” he began. “Or maybe somewhere in the 1970’s.”

“There appears to be only two points on the scale–normal and on fire,” Stewart continued, noting even volcanos have a four-step warning system.

Stewart said you know your city is f–ked up when the most successful employment program was casting extras for HBO’s “The Wire.”