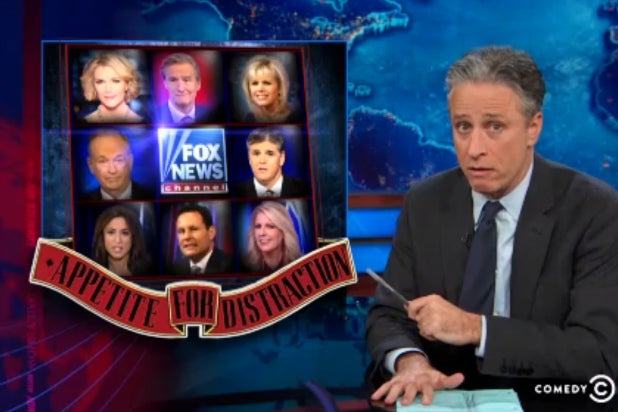 Jon Stewart rushed to the aid of Barack Obama on Tuesday night, two days after a contentious pre-Super Bowl interview between the Commander-in-Chief and Bill O’Reilly left Fox News pundits trashing the President.

O’Reilly dipped “whole scale into the full Fox scandal grab-bag,” Stewart said of Sunday’s less-than-biased interview, focusing on Libya, Benghazi, IRS corruption, Obamacare — all of the “greatest hits” against the leader of the free world.

Not that the Commander-in-Chief needs Stewart’s help defending himself. When asked on Fox before the big game, Obama calmly accused O’Reilly — and his network — of providing unfair coverage to his administration: “These kinds things keep resurfacing, in part because you and your TV station will promote them,” the President said of the conversation.

“That is quite an accusation, that Fox News unfairly promotes — and in some cases creates — scandals for the sole purpose of undermining this president,” Stewart said. “Although in Obama’s defense … it is true. That is exactly what Fox does every day.”

Naturally, Fox News talking heads did not take the POTUS’ accusation well. Cue a montage of O’Reilly’s outraged colleagues, saying that Obama did what he does best on Sunday: changing the subject and blaming the conservative news channel for his flaws.

Six years into his presidency, and the cable channel’s talent is not hearing the admissions that they want to hear from the elected leader. To which Stewart rhetorically asked: “You know the President doesn’t work for Fox, right?” He added, “He can deviate from your script.”