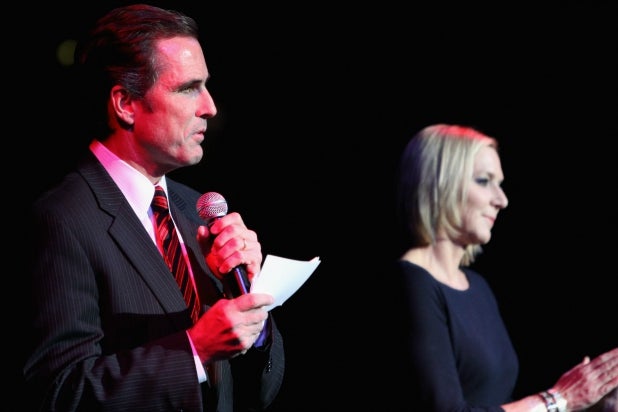 attends The New York Comedy Festival and The Bob Woodruff Foundation present the 8th Annual Stand Up For Heroes Event at The Theater at Madison Square Garden on November 5, 2014 in New York City.

Springsteen has performed at every one of these events since their inception.

“Despite their wounds, veterans are returning home looking for their next challenge, to make a true difference in their communities — sometimes, they just need a helping hand — and events like ‘Stand Up for Heroes’ help us do that,” said Bob Woodruff. “(Wife) Lee and I are so humbled by the generous contributions of the talent, sponsors, and variety of organizations in honor of our nation’s heroes and their families. Each year the show gets bigger and better, demonstrating the unwavering support of all those involved”

“The Bob Woodruff Foundation supports an incredible cause, and we are proud to once again partner with the organization to show a small token of gratitude to the men and women who have risked their lives protecting our country,” added Caroline Hirsch, Bob Woodruff Foundation board member and founder of the New York Comedy Festival and Carolines on Broadway. “It is heartening to see the immense support we continue to receive year after year for this worthwhile cause, both from the performers and the generous supporters.”

Beginning at Town Hall in 2007, moving to the Beacon Theater in 2010, and transitioning to The Theater at Madison Square Garden in 2013, “Stand Up for Heroes” has continued to expand and grow due to its remarkable success. Over eight years, comedians including Stephen Colbert, Louis C.K., Jim Gaffigan, Ricky Gervais, Conan O’Brien, Jerry Seinfeld, Brian Regan and Robin Williams have taken to the stage in an effort to advocate for servicemen and women. Together, the shows have raised more than $27 million.

In 2006, Bob and Lee Woodruff (pictured above at last year’s event) found themselves facing similar challenges to injured service members during Bob’s recovery from injuries sustained by a roadside bomb while covering the war in Iraq for ABC News. Inspired by their experiences, they resolved to ensure that our nation’s heroes have access to the same level of support and resources.