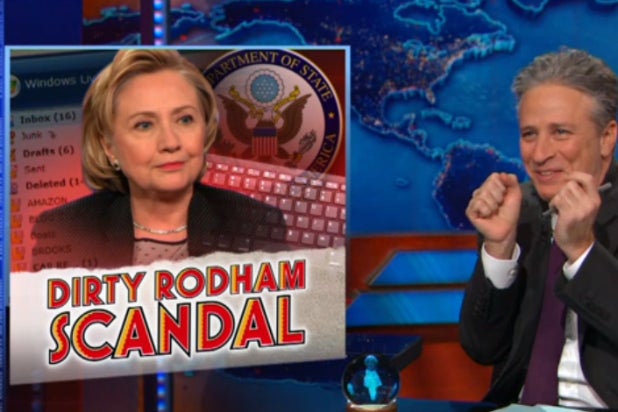 Jon Stewart has no grave concerns about Hillary Clinton’s personal email use while Secretary of State. Still, he used some “Daily Show” time to make fun of what he sees as a non-scandal, and all of those involved.

The “future president” — as Stewart referred to Clinton on Wednesday — did not have an official government email account during her time in office, possibly breaking federal record-keeping rules. Clearly, the Comedy Central figure doesn’t believe this will impact her likely 2016 candidacy.

“Do you think maybe wrong-email-address-ghazi will be a big boost to her Democratic primary rival, TBD?” Stewart quipped. “Or perhaps this will effect Hillary Clinton’s standing with Republicans in the general election, who pretty much already believe her and her husband to be treasonous, murdering grift-asauruses?”

“Personally, I think her email trouble helps sew up the senior vote,” he concluded. “They can relate.”

Also Read: Jon Stewart Trashes CNN for Star of David Wipe: ‘Are You Kidding Me? That Actually Happened’ (Video)