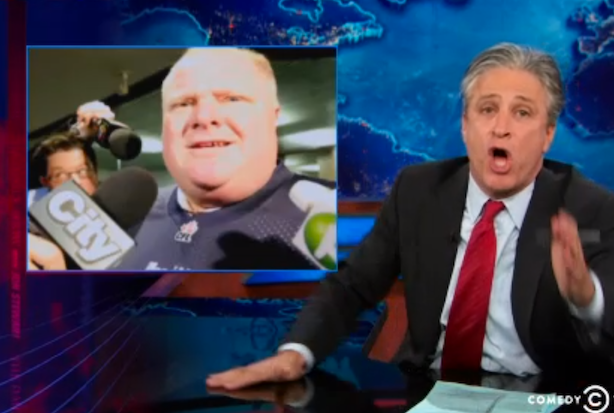 Rob Ford, better known as the crack-smoking mayor of Toronto, admitted this week that he has bought illegal drugs while in office, but insists that there are some lines that he refuses to cross.

As Jon Stewart noted on Thursday’s edition of “The Daily Show,” the pride of Canada steadfastly denies that he told a staffer that he “wanted to eat her p—y” by noting that he was happily married and had more than enough to eat at home.

But that wasn’t the only scandal that Ford is currently facing. He’s also being accused of driving while intoxicated, snorting cocaine and consorting with a prostitute.

“And then after lunch…” Stewart quipped, adding, “This guy is a one man episode of ‘Cops.'”

Ford, who still hasn’t resigned from office, must be leaving other scandal-plagued politicians green with envy.

“Somewhere in a basement, through his tears, Anthony Weiner is going — what the f–k,” Stewart said.