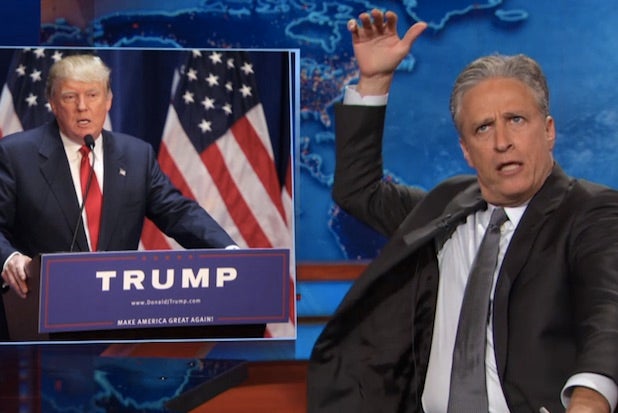 Jon Stewart gleefully tore into Donald Trump on “The Daily Show” again Wednesday, recounting a dream in which Trump announced he was running for president.

“This man descended down an escalator like a God going from theater 12 to theater seven at the multiplex,” the host joked. “In my dream he ended up saying a bunch of weird stuff about Mexicans and then I woke up.”

“Oh my God! Oh my God!” Stewart screamed while pulling out a lock of Trump-like hair, realizing he wasn’t dreaming.

Stewart then pivoted to spoofing the trade deal negotiations between President Obama and Congress before ultimately returning to Trump.

“The point is this, our legislative system is complex and we need a leader that can cut through the legislative bureaucracy to get things done,” he teased before playing a sound bite of Trump saying he’d be “the greatest jobs president that God ever created.”