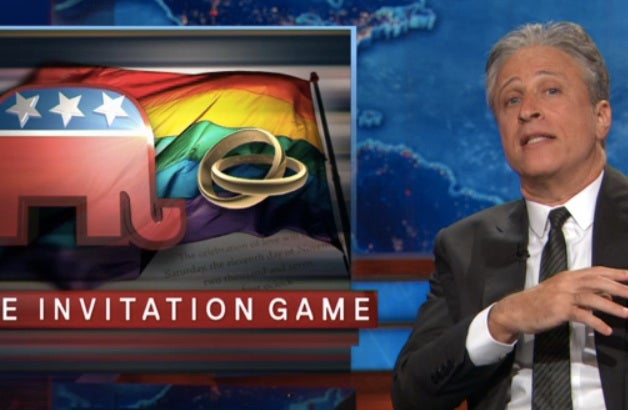 Jon Stewart went to town on the Republican candidates Tuesday for their array of answers, or non-answers, on gay marriage.

“If you can’t handle these questions, how are you going to handle Putin asking you to go to a gay wedding?” Stewart asked.

Borrowing from the infamous Hillary Clinton 3 a.m. phone call campaign ad, Stewart suggested the 2016 election will come down to who voters trust to pick up the phone at that time and “RSVP to a gay wedding.”

He then poked fun at Marco Rubio, who has said although he disagrees with gay marriage, he’d go to a loved one’s wedding.

“The reception’s probably going to be awesome,” Stewart joked. “I didn’t learn the entire Vogue dance for nothing.”

“Marriage is an abstract principle that exists on a theoretical plane and has no practical impact on actual people…as God intended,” Stewart concluded sarcastically as a jab at the candidates.