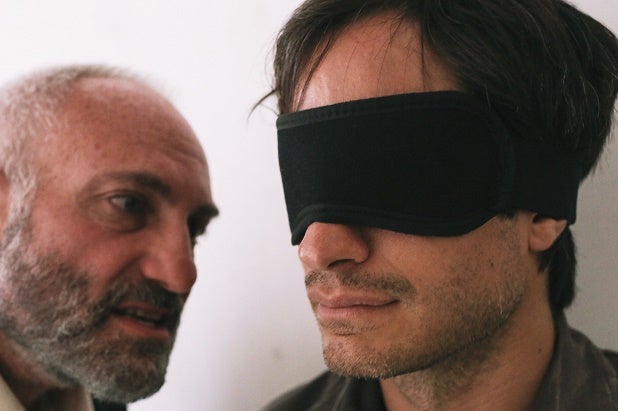 Jon Stewart, you just might want to keep your “The Daily Show” day job, if the early box office returns are an indicator.

The cable TV host made his movie writing and directorial debut on “Rosewater,” a drama starring Gael Garcia Bernal that Stewart also executive produced. It’s based on the memoir “Then They Came for Me” by Maziar Bahjari (in photo with Stewart below) and Aimee Molloy,” and recounts the tale of journalist Bahjari’s 2009 imprisonment by Iran.

Distributor Open Road Films is gradually releasing “Rosewater,” hoping to build positive word of mouth and the theater count at the same time. It kept “Rosewater” in 371 theaters for its second weekend and it brought in $2,076,466 for a $1,557 per-screen average, according to Sunday estimates.

That’s not horrible, but it’s not great either. The most disconcerting reality is that the second-week grosses from the same number of theaters were down by 51 percent from opening weekend numbers, and that’s not what you want to see when you’re trying to build buzz into box office. (Though it’s worth noting that the opening weekend grosses were swelled by a special screening event attended by Stewart and Stephen Colbert.)

To put the number in perspective, another second-week indie film, “Kirk Cameron‘s Saving Christmas,” dropped from 410 theaters to 390 and brought in $643,000 for a $1,650 per-screen average.

The critics like “Rosewater,” which is at 74 percent positive on review aggregation site Rotten Tomatoes.

It’s a low-risk proposition for Open Road, since “Rosewater” had a production budget in the single-digit millions and the advertising spending is in line with that. Stewart has been very active in promoting the film.

“Rosewater” is a thoughtful take on a serious subject, which means it could merit some awards consideration. But the subject matter will make it a challenge to connect with mainstream moviegoers as “Rosewater” expands into more theaters in coming weeks.