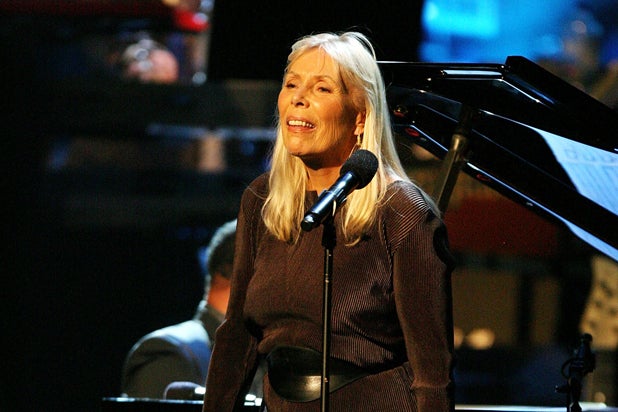 UPDATE, Tuesday, 4:42 p.m.: Joni Mitchell’s website reports that the singer is not in a coma — and that, while Mitchell remains hospitalized, “she’s alert, and she has her full senses.”

The post adds that a “full recovery is expected.”

The site did state that Mitchell’s longtime friend Leslie Morris has filed for conservatorship, a fact confirmed by court papers obtained by TheWrap.

Contrary to rumors circulating on the Internet today, Joni is not in a coma. Joni is still in the hospital – but she comprehends, she’s alert, and she has her full senses. A full recovery is expected. The document obtained by a certain media outlet simply gives her longtime friend Leslie Morris the authority – in the absence of 24-hour doctor care – to make care decisions for Joni once she leaves the hospital. As we all know, Joni is a strong-willed woman and is nowhere near giving up the fight. Please continue to keep Joni in your thoughts. You may add your well wishes for her at the website WeLoveYouJoni.com.

While Mitchell’s website describes the singer as “alert,” Morris’ petition for conservancy states that she “remains unconscious and unable to make any responses, and is therefore unable to provide for any of her personal needs.”

Iconic singer Joni Mitchell is unconscious in a hospital nearly a month after being hospitalized, according to media reports.

TMZ published a story Tuesday saying Mitchell, known for hits such as “Big Yellow Taxi,” is unresponsive, and that a close longtime friend has filed papers applying for a conservatorship.

Mitchell was rushed to the hospital from her home on March 31, after she was found unconscious.

A message posted on the singer’s website on April 3, just days after her hospitalization, painted a considerably rosier picture. In that message, fans were told that Mitchell continues to “get stronger each day.

“Joni remains under observation in the hospital and is resting comfortably. We are encouraged by her progress and she continues to improve and get stronger each day,” the message read.

According to TMZ, Leslie Morris, a friend of the Canadian-born, 71-year-old singer’s for more than 40 years, filed papers seeking conservatorship on the grounds that Mitchell doesn’t have any close relatives able to look after her affairs.