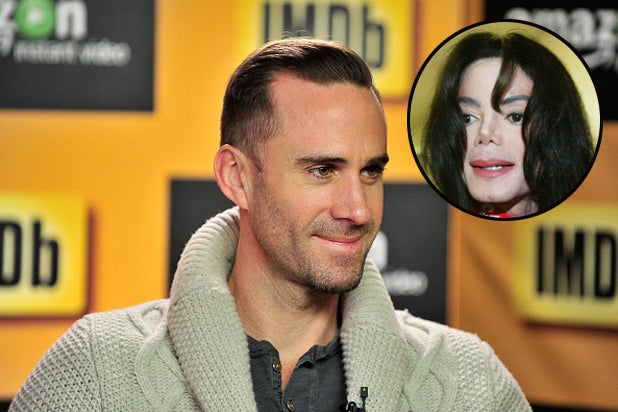 The Internet is buzzing with outrage over the prospect of Joseph Fiennes — a white, British actor — playing Michael Jackson in the upcoming Sky Arts production, “Elizabeth, Michael and Marlon.”

The story is a dramatization of an urban legend about Jackson, Marlon Brando and Elizabeth Taylor escaping New York City via rental car following the Sept. 11 terrorist attacks. All three had been in town for Jackson’s 30th anniversary concert special at Madison Square Garden the night before.

“It’s fascinating and funny … Wonderfully hilarious,” Fiennes told TheWrap at a junket for his upcoming film “Risen” on Jan. 22.

“Is it urban myth? I don’t think it is. I think it’s absolutely true,” the “Shakespeare in Love” actor continued.

“Marlon goes on stage [at the anniversary concert] — he’s paid God knows how many millions — and he rambles on about kids in Africa with machetes, and that’s not what Michael Jackson and his team want as an introduction. Finally, he’s booed off the stage,” he said.

“So then the appalling atrocity of 9/11 [happens], and airspace is shut down, and off they go, the three of them — Liz, Michael and Brando — to Hertz or some rental car company. They get a car and they drive 500 miles to Pennsylvania, stopping too many times at Burger Kings and things like that for Marlon in the back.”

The film — a half-hour comedy — is based on a story first reported in Vanity Fair, detailing the claims of a former employee of Jackson’s. It also stars Brian Cox as Marlon Brando and Stockard Channing as Elizabeth Taylor.

While others have expressed disbelief or even anger at the prospect of a white actor portraying the King of Pop, Fiennes didn’t see anything wrong with the idea. If anything, he wishes they could have made him look even more like Jackson. However, he did admit to having some reservations when first approached about the project.

“I was like, ‘Wait a minute, I think someone’s got this wrong. I mean, really?'” Fiennes recalled with a laugh. “The budget was too low to do prosthetics or anything, so it literally is straight-forward makeup. And it’s really saying, ‘Look, audiences, it’s tongue-in-cheek.’ No one’s trying to do an exact impersonation, but it’s just a sense of the fun of the road trip. If it did happen, maybe it happened like this. That’s all it is, a lighthearted take.”

Fiennes didn’t foresee the negative reaction news of the project would incite, but he’s still looking back on the experience of making it with fondness. “I actually grew to adore Michael Jackson, who I’ve always loved from the ’70s as a kid growing up,” he said. “But I guess as an actor you’re always trying to find a way in and identify. It just made me adore him even more somehow.

“It’s a short film, but if it does well it would be lovely to revisit that trio and all their fallibility, fame and how it can dislocate you from the sense of reality,” Fiennes revealed. “We know that and we see that. We sort of riffed on that, but then we get into the pathos and their brilliant fragile minds as well. It was great.”

While no official photos have yet been released from the film, Fiennes showed TheWrap a pic on his iPhone from the shoot showing the three main characters in costume. Taken in a field under chilly, grey skies, Cox stands off to the side as Brando, while Channing sits leaning against Fiennes, staring off wistfully. Fiennes wears Jackson’s familiar black fedora, with shoulder-length black hair framing his face, lightened by makeup.

Fiennes — who is the younger brother of Oscar nominated actor Ralph Fiennes — is best known for his role in the 1998 Oscar darling “Shakespeare in Love.” He has also appeared in “American Horror Story” and the Dwayne Johnson action film “Hercules.” He will next be seen in “Risen,” a historical drama telling the epic Biblical story of the Resurrection, as told through the eyes of a non-believer.