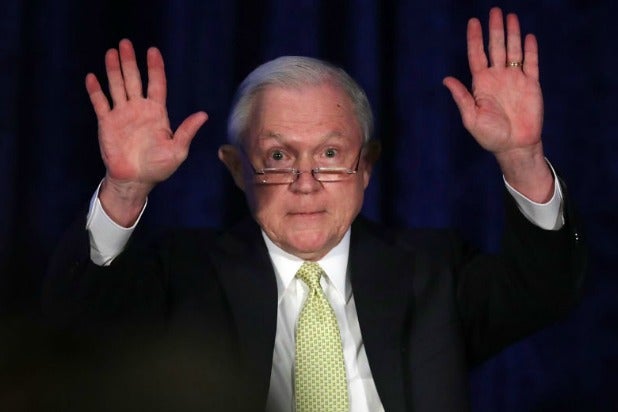 Hollywood stars from Kumail Nanjiani to Kathy Griffin didn’t have much sympathy for Jeff Sessions as he resigned as attorney general on Wednesday — but a few people wondered what impact his exit would have on special counsel Robert Mueller’s investigation of President Trump.

“Goodbye Sessions. Couldn’t have happened to a worse guy,” said Nanjiani, who joked that Sessions is “Waze-ing the quickest route to Mueller’s office.”

While Nanjiani’s joke presumed that Sessions might turn against Trump by helping Mueller, others worried that it could throw the investigation off track. Sessions’ replacement will now take over control of the Mueller investigation, a fact that led to fears about its future, the New York Times explained.

“I need that little elf to stay on longer until Mueller is done,” joked Kathy Griffin.

“We thank Attorney General Jeff Sessions for his service, and wish him well!” Trump tweeted, adding that a permanent replacement would be named later.

Hollywood figures had varying degrees of shock, disapproval and joy.

“The Daily Show with Trevor Noah” noted that several members of the Trump Administration have resigned since his inauguration.

“Boom! Jeff Sessions out. He can go back to sleep now, this Rip Van Winkle,” said conservative filmmaker Dinesh D’Souza. “For obvious reasons @RealDonaldTrump needs someone active, tough and fearless in this job.”