The trial of Kyle Rittenhouse, the teenager who shot and killed two protesters in Wisconsin last August after he crossed state lines with deadly weapons, took an interesting turn on Wednesday.

While Rittenhouse’s defense attorney spoke, Judge Bruce Schroeder’s phone — nobody tell the bailiff he didn’t turn his cell phone off — started ringing, revealing that his ringtone is the jingoistic song “God Bless the U.S.A.” by Lee Greenwood. Which, as a whole lot of people pointed out, just happens to be the song former President Donald Trump frequently uses when he comes out on stage during his rallies.

You can see the moment for yourself in the video below: 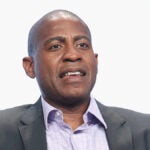 Rittenhouse, then 17 years old, left his Illinois home with an assault rifle and traveled to Kenosha, Wisc., on Aug. 25, 2020. The city was at that time in the middle of two days of protests over the shooting of a man named Jacob Blake by local police. It’s still not entirely clear what happened, but the situation was chaotic and it appears several protestors, for some reason, were carrying guns. Rittenhouse walked toward a group of protestors at one point, someone fired into the air and another protestor attempted to take Rittenhouse’s gun from him. Rittenhouse shot and killed this person.

Several other protesters started chasing Rittenhouse, some of those people pushed him to the ground and attacked him and he shot and killed another person during the melee. Rittenhouse ended up shooting a third person, not killing them, before leaving the scene. He was later arrested. Shortly after being released on bail, Rittenhouse was photographed making a white power gesture and associating with white supremacists.

Meanwhile, last week, Judge Schroeder forbade prosecutors in the case from referring to the two people Rittenhouse killed as “victims.” Rittenhouse is pleading self defense.