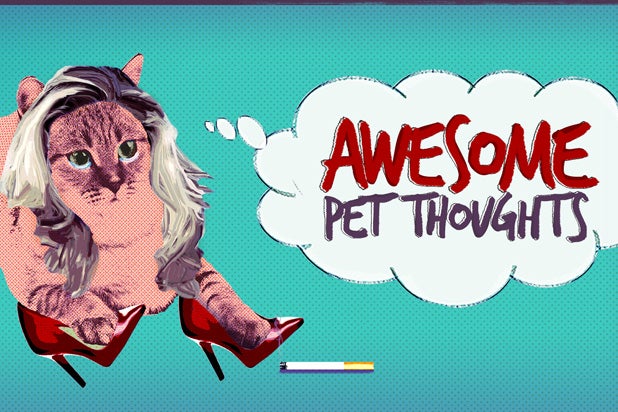 Jukin Media, which specializes in user-generated footage — and brought the world “Chewbacca Mom” — has a new show on Comcast’s Watchable streaming video service. And yes, it involves cat videos.

“Awesome Pet Thoughts” utilizes user-submitted pet clips — a Jukin staple — as building blocks in an offbeat, scripted show that puts the animals in situations millennials might face, such as dealing with a weekday hangover or an uncomfortable office romance.

Each episode is between three and four minutes, and uses source material from Jukin’s vast repository of user-generated content. The videos are stitched together to create offbeat storylines with recurring characters.

The first five episodes of “Awesome Pet Thoughts” are currently available on Watchable, and the remaining 15 will be released over the coming weeks. The show was written and directed by Jukin’s creative team.

“Awesome Pet Thoughts” can be viewed at Watchable.com, via the Watchable iPhone and Android apps, or for Xfinity X1 customers — directly on their TVs.

Entman believes programs like “Awesome Pet Thoughts” are the next-generation of cable news “clip shows,” such as E!’s late, great “The Soup.”

“It’s not putting together a bunch of pet clips and doing voiceover on top of it,” he said. “You’ve see that a million times on Animal Planet. This is more about telling a story with user content. It’s very ‘Seinfeld’-ian.”

Jukin’s main business is the acquisition and licensing of user-generated videos that fill some of its most popular YouTube channels, such as “FailArmy” (11.6 million subscribers), which features clips of epic “fails,” and “People Are Awesome” (1.4 million), which showcases superhuman feats of bravery — or foolishness.

Also Read: Chewbacca Mom Gets Her Own Hasbro Action Figure

Jukin also owns and licenses some of the most notable viral internet videos, including “Pizza Rat” and, of course, “Chewbacca Mom.” And the company produces original programs of its own, like its “FailArmy” and “Now That’s Funny!” TV shows.

Entman said “Awesome Pet Thoughts” came about when Watchable execs approached Jukin about getting the brand on its platform, Comcast’s online and mobile streaming service.

“What they came back with was great,” Craig Parks, Watchable’s VP of Programming, told TheWrap. “Taking user-generated content and tweaking it into this weird kind of sitcom-like thing.”

Parks said he encourages Watchable’s other content creators not to play it safe, and to experiment with the platform.

“A large reason why Watchable exists is to see how digital content plays on TV,” he said.