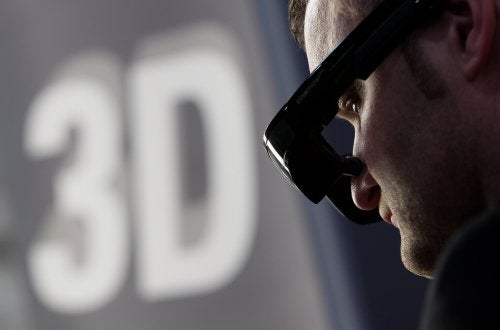 Sony has joined the hunt for 3D dollars.

The Japanese electronics conglomerate announced Tuesday that it will launch a line of televisions in Japan in June, with other countries soon to follow.

The cost for early adaptation is steep. Forty-six inch and 40 inch Bravia flatscreen sets will sell $3,875 and $3,200 respectively, $1,000 more than their non-3D equivalent sets. Each TV comes with two pairs of 3D specs. Fifty two inch and 60 inch televisions will hit stores a month later, and will cost nearly double that of the smaller sets.

No U.S. launch has been announced, but 3D sets will probably go on sale domestically this summer, a Sony spokesperson told TheWrap.

The manufacturer will be playing catch up with key competitors Panasonic, LG Electronics, and Samsung, all of whom have either started selling their 3D models or plan to this spring.

With the big 3D ponies "Avatar" and "Alice in Wonderland" winding up their theatrical run and a line of new 3D titles like "Spider-Man 4" still on the horizon, the pickings in terms of three dimensional Blu-rays and DVDs are slim. In the interim, Sony and others are betting that the market for 3D video games will be bullish. It’s well positioned to help in that department. No doubt, Sony will be busy hawking 3D compatible Play Station 3 models along with its jazzed up flat screens.

Despite, the lack of 3D film titles, Sony has high hopes, estimating that 10 percent of TV sales in the fiscal year ending March 31, 2011 will be from 3D sets, the Wall Street Journal reports.