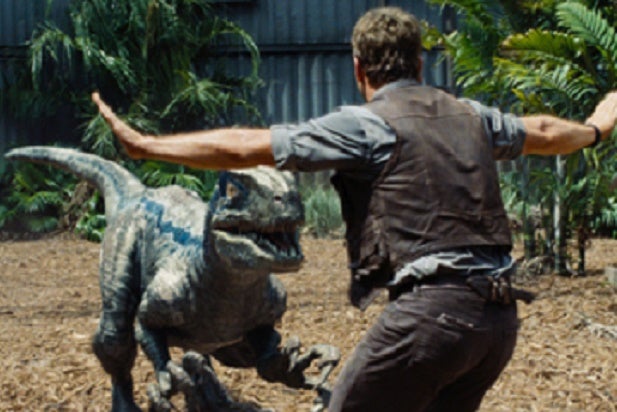 This weekend’s “Jurassic World” box-office opening will be hotter than Anastasia and Christian’s, not as fast as Dominic Toretto and his gang’s and about as on-target as Katniss Everdeen’s.

Around $125 million is the consensus projection of analysts, though distributor Universal Pictures is more conservative and says “north of $110 million.” The record for a June debut is $116 million put up by “Man of Steel” in 2013.

Universal is giving its $150 million sequel to Steven Spielberg‘s iconic 1993 dinosaur thriller the largest domestic and global rollouts in the studio’s history. “Jurassic World” will be in 4,273 North American theaters by Friday after a limited Thursday night rollout, with every IMAX and Premium Large Format devoted to the dinos this weekend.

“Jurassic World” will also open in 66 foreign territories this weekend, including China, and it ranks as the widest day-and-date rollout ever for IMAX, which has it in more than 800 locations worldwide.

Spielberg is back as executive producer on “Jurassic World,” along with Legendary’s Thomas Tull, and Frank Marshall and Patrick Crowley are the producers.

Universal has shown tremendous confidence in Trevorrow, who is making a huge leap with “Jurassic World,” just the second film he’s directed. His first was the sweetly engaging 2012 time-travel comedy “Safety Not Guaranteed,” an independent film which cost $750,000 to make and took in $4 million at the box office.

That one drew terrific reviews, and the notices for “Jurassic World” so far haven’t been as good, but part of that is surely due to the very high bar set by the original film.

It’s not easy to find a reason to doubt the film’s strength, but if there is a soft spot, reviews might be it. They’re pretty good — 75 percent positive on Rotten Tomatoes with 56 reviews counted — but not great, although everything else points to a monster opening.

Also Read: 'Jurassic World' Reviews: Thrill Ride for Some, 'Triceratops-Sized Dud' for Others

The tracking has shown broad and strong interest and pointed to an opening of more than $110 million for weeks, social media shows comparable strength and, as the weekend’s only wide opener, “Jurassic World” is dominating advance sales at Fandango and MovieTickets.com.

“I don’t think it will have any problem overcoming any negative reviews,” said Phil Contrino, senior analyst at BoxOffice.com. “But it will be worth watching the buzz after the Thursday night screenings, because they might tell us quite a bit about the weekend.”

“Furious 7” roared to $15.8 million in its Thursday night shows, but we won’t know how the “Jurassic World” count will stack up against that film’s 3,000-plus early screenings until Friday. Universal has set 7 p.m. as the hour that exhibitors can begin Thursday shows, but the number of screens each gives it is at their discretion.

If “Jurassic World” debuts as expected, it will give Universal four of 2015’s top five openings with “Fifty Shades of Gray,” “Furious 7” and “Pitch Perfect 2,” which opened to $67 million in March, trailing only Disney’s “Avengers: Age of Ultron,” which kicked off summer with a $191 million opening in May.