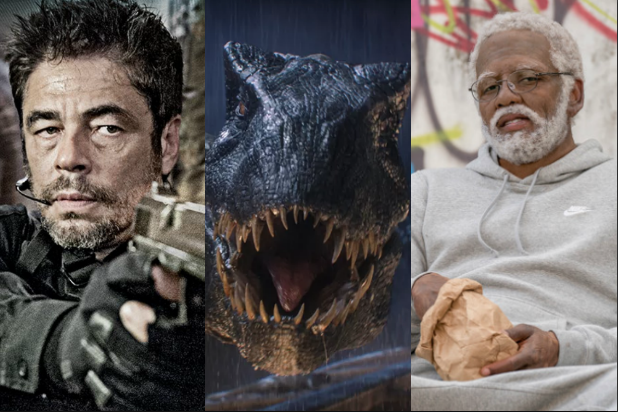 As a very successful June at the box office comes to a close, “Jurassic World: Fallen Kingdom” is expected to easily hold onto the No. 1 spot with an estimated $75 million second weekend; meanwhile Lionsgate’s “Uncle Drew” and Columbia’s “Sicario: Day of the Soldado” will try to carve out a decent return on their mid-level budgets.

“Sicario: Day of the Soldado,” which opens on 2500 screens this weekend, is the sequel to Denis Villeneuve and Taylor Sheridan’s critically acclaimed “Sicario,” which made $84 million worldwide against a $30 million budget. Though that’s not exactly the sign of a franchise starter, “John Wick” was made into a franchise over at Lionsgate, and that film had an $88 million total against a $20 million budget.

What makes “Soldado” risky is that Benicio Del Toro’s original co-star Emily Blunt has not returned. Also, Villeneuve did not direct this time, as Italian crime film director Stefano Sollima helmed. The film is positioned more as a straight thriller than was the original. And critics, so far, have not been as effusive in their praise as they were for “Sicario.” Still, reviews have been positive, the sequel earning a 70 percent Rotten Tomatoes score as of this writing.

“Sicario” opened to $12 million in 2015, and both Sony and independent trackers are expecting the same figure here. It will be interesting to see if the recent headlines concerning Donald Trump’s highly criticized family separation border policy increase interest in the film, as “Soldado,” much like its predecessor, immerses itself in the moral quagmires that come with life as a government agent on the U.S.-Mexico border.

If it does, and finds good word of mouth along the way, “Soldado” could find the fuel for a solid run through July despite the litany of crowd-pleasing blockbusters on the slate. And with Trump in the White House, the film’s topicality won’t be diminishing anytime soon.

“Sicario: Day of the Soldado” sees Del Toro return as former undercover operative — or Sicario, as they are called — Alejandro Gillick as he teams up with CIA Agent Matt Graver in an attempt to trigger a war between Mexican drug cartels that are smuggling terrorists across the border. But when the Mexican government discovers the plot, Gillick and Graver turn on each other as the former has to decide whether it’s time to stop traveling down the dark path he has taken in Mexico. The film has a reported $35 million budget.

Meanwhile, Lionsgate will try to win over basketball fans with the comedy “Uncle Drew,” which is based on a series of Pepsi commercials in which NBA star Kyrie Irving disguises himself as an elderly man and surprises onlookers at park pick-up games. Like “Soldado,” the film is looking at a $12 million opening against a budget reported to be in the high teens.

To get enough traction, “Uncle Drew” will likely have to make inroads with the under-25 demographic, a group that is currently being held by “Jurassic World: Fallen Kingdom” right now. In fact, Universal reported that two-thirds of its opening weekend audience for “Fallen Kingdom” were under the age of 25.

If “Uncle Drew” can’t peel some of that demo away, it might have to rely on older millennials and Gen X moviegoers who were fans of some of the retired NBA stars from the turn of the century that are appearing in this film. Joining Irving on the team of faux-elderly ballers are Shaquille O’Neal, Chris Webber, Reggie Miller, Nate Robinson, and Lisa Leslie. On the actor side, the film will look to win over the fanbases of “Get Out” breakout star Lil Rel Howrey and “Girls Trip” star Tiffany Haddish.

“Uncle Drew” stars Howrey as an aspiring street baller who loses the team he was planning to enter into the Rucker Park tournament to his bitter rival (Nick Kroll). But his life changes when he stumbles across Uncle Drew, convincing him to round up a team of fellow seventy-somethings to turn back the clock. JB Smoove, Erica Ash, and Mike Epps also star, and the film currently has a 57 percent RT score.