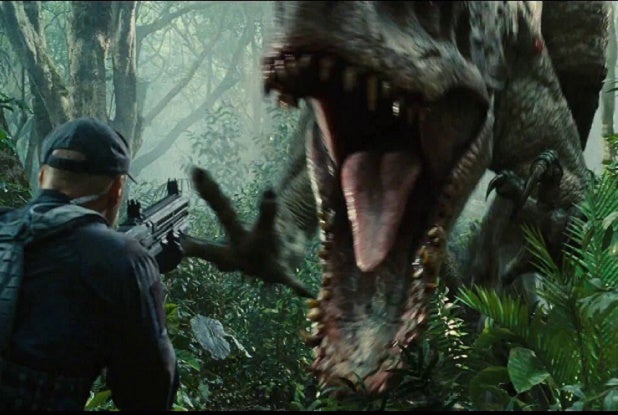 That “Jurassic World” explosion at the box office isn’t over yet. Universal’s dynamic dinos rolled to a whopping $25 million on Monday, according to early estimates.

That comes on the heels of a spectacular debut weekend in which the sequel to Steven Spielberg‘s 1993 sci-fi classic shattered domestic ($208 million), foreign ($315 million) and worldwide ($524 million) records.

If Monday’s early numbers are accurate, “Jurassic World” will have posted the third- or fourth-largest Monday ever, behind 2004’s “Spider-Man 2” at $27.6 million, 2008’s “Indiana Jones and the Kingdom of the Crystal Skull” at $26.7 million and right around “Pirates of the Caribbean: At World’s End” with $25 million.

The Monday haul by “Jurassic World” is roughly $6 million above the $18.9 million put up by Disney and Marvel’s  “The Avengers” on the day after it set the record for the biggest domestic opening weekend back in May of 2012, which “Jurassic World” broke over the weekend.

The second-place movie on Monday was the Melissa McCarthy comedy “Spy,” which brought in a little less than $2 million, early estimates indicated.

“Jurassic World” will face some stiff competition this weekend from Disney and Pixar Animation’s debuting “Inside Out,” but the dinosaurs will go in as the favorite, and Monday’s haul underscores that.