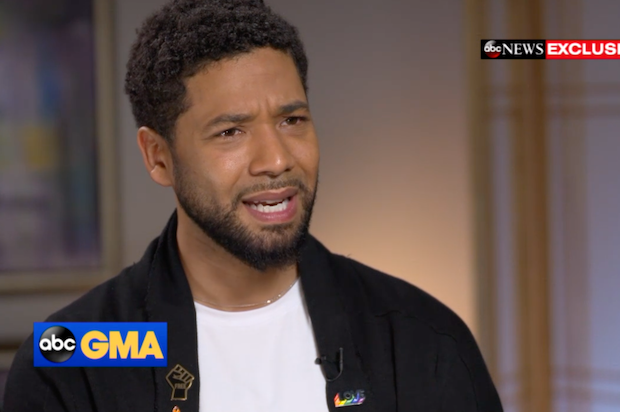 In an interview that will air Thursday morning, Jussie Smollett told “Good Morning America” anchor Robin Roberts that he is certain the two men featured in surveillance footage obtained by Chicago police are the same men he says attacked him.

“I don’t have any doubt in my mind that that’s them,” Smollett said in an excerpt from the interview made available Wednesday. “Never did.”

As TheWrap first reported, Roberts landed the first interview with the “Empire” star since reported being attacked in Chicago while walking to his apartment. According to Smollett, two men attacked him while yelling racial and homophobic slurs and referencing “MAGA.” A police statement said unspecified chemicals were poured on the “Empire” star’s face, and a rope placed around his neck.

Also Read: Jussie Smollett Tells Robin Roberts He's 'Pissed Off': 'How Do You Not Believe That?' (Video)

A day after the incident, police released images of two “potential persons of interest” taken from a surveillance video.

The photos showed two silhouettes walking in the area of where Smollett was sometime between 1:30 a.m. and 1:45 a.m., but did not show any attack. Chicago police said they would like question the two people.

Asked why he was convinced those were his attackers, Smollett told Roberts, “I was there,” adding, “For me, when that was released, I was like, O.K., we’re getting somewhere.”

In the clip, Smollett also said he was “pissed off” at what he called “attacks” from those who may have doubted his account.

“What is it that has you so angry? Is it the…attackers?” Roberts asked.

“Attackers, but it’s also the attacks,” Smollett responded. “It’s like, you know, at first, it was a thing of, like, ‘Listen, if I tell the truth then that’s it, ’cause it’s the truth.’ Then it became a thing of like, ‘Oh, how can you doubt that? Like, how do you- how do you not believe that? It’s the truth.'”

Police had asked for Smollett’s phone records because he said he was on a call with his manager, Brandon Z. Moore, during the attack. After Smollett turned the records over, Chicago police said they were too heavily redacted to be useful to their investigation. A Chicago police spokesman, Anthony Guglielmi, said in a statement, “We are very appreciative of the victim’s cooperation however the records provided do not meet the burden for a criminal investigation.”

On Tuesday, Smollett’s publicists pushed back, saying that the actor was only trying to protect “the privacy of personal contacts.”

Watch the clip from the interview below, and see the full interview Thursday at 7 a.m. on “GMA.”

.@JussieSmollett tells @RobinRoberts that there is no doubt in his mind that the men pictured in surveillance footage attacked him. "I don't have any doubt in my mind that that's them." See more of the EXCLUSIVE interview TOMORROW on @GMA. https://t.co/3HbyU2SFxe pic.twitter.com/hiNGiHDyl0