The starting lineups for the NHL All-Star Celebrity Shootout read like a guest list for the Emmys, Oscars or Grammy Awards — with a few Stanley Cup-winning hockey players thrown in the mix.

While most players inspired cheers from the crowd when they were announced before the puck dropped, Biebs got boos — but he’s used to that, right?

The “Sorry” singer took an early shot on goal — which didn’t go in, and earned more jeers — but Gretzky teammate Nicklas Lidstrom quickly made up for it by whacking the puck in the net.

On the sidelines, E! News’ Ken Burns had an exclusive injury report for the commentator, revealing: “I’m a little hungover!” Now that’s not going to help his accuracy. 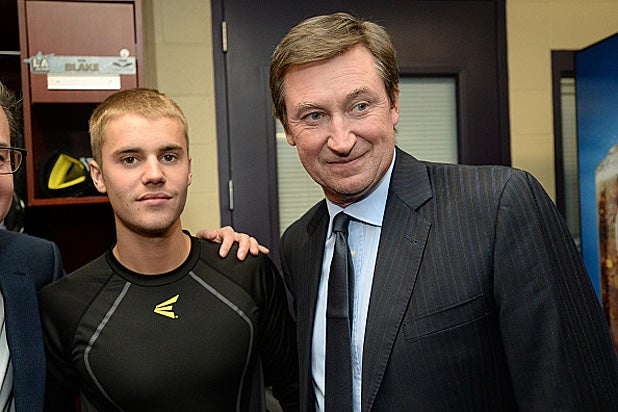 On a more serious note, Canadian actor and huge hockey fan, Alan Thicke, is gone but was far from forgotten. Not only was youngest son, , but every player had an “AT” patch on their jerseys in his memory. “It’s an enormous honor,” one pro said.

The Anaheim Ducks’ “Finnish Flash” Teemu Selanne soon evened up the score for Team Lemieux. Then Biebs got another (failed) penalty shot, and lots of jabs from the commentator. “What did you mean, ‘Oops, sorry’?” Yep, the cheese factor was way up there in the commentators’ box.

Even Hall of Famer Gretzky gave him grief, saying they could take if “number 6 finally scored some goals.”

After getting heaped with praise for his portrayal of former NFL star O.J. Simpson in FX’s “,” Gooding Jr. proved he has some sweet stick skills by scoring a goal in the second period.

Bieber finally got his moment of glory and hit the last goal of , to bring a 5-3 victory to Team Gretzky.

In the very un-serious press conference afterwards, Gooding Jr. opened with a mock speech, “I’m happy to be traded to Toronto. I think my first intention was to show my mom there’s color in there.”

As for Bieber’s determination to score, “Twenty-five shots later, he finally made it. I was shocked how well he could play!” the “Jerry Maguire” star marveled.

He went on to say that he did get bit nervous before the game. “When Patrick [Kane] came in the locker room and took his jacket off, I realized I’m in trouble. He came in the last minute and said ‘I want to skate in this game.'”

Gretzky agreed, saying “Players like Kane jumping in gave it some credibility.” 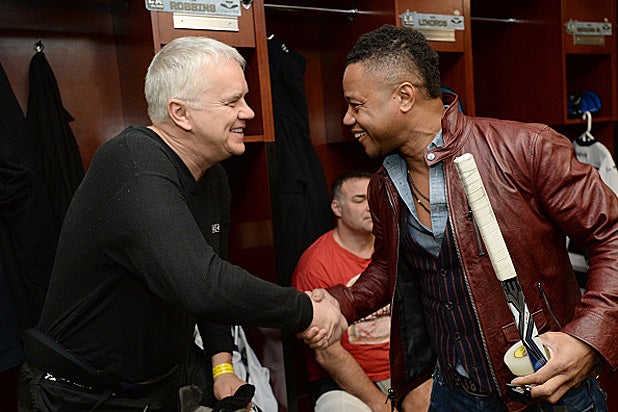 When asked about Cuba’s goal, the coach wasn’t quite as polite: “There’s a lot of great players who aren’t great skaters but still ended up scoring goals.” That doesn’t really sound like a compliment …

The competition level amped up next with the NHL Skills contest as the league’s most smokin’ hockey fan, Snoop Dogg, DJed during the player announcements. (He was back again, a little hazier, later in the night to perform at the VIP after party).

It looked like fun and games on the ice, but it was serious stuff as the NHL’s biggest players flew the pucks through (Gatorade) cones, down little ladders and across the length of the rink. 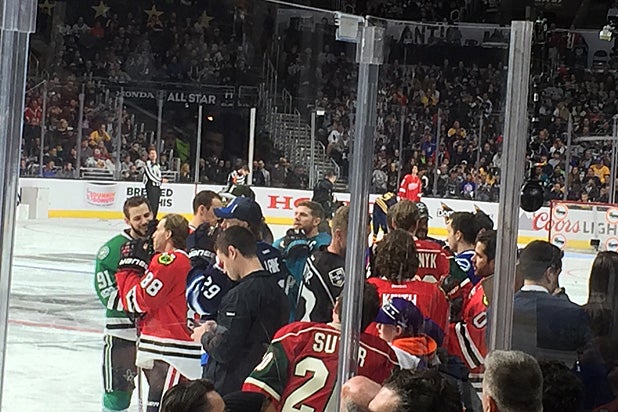 As jerseys for every team filled the ice, you’d think think they were playing in Game 7 of the Stanley Cup Finals judging by the intensity.

The new Four Line Challenge event quickly separated the champs from the also rans as they had two chances to make a shot through a very small hole with the line moving further and further back.

Even though NoCal rivals San Jose Sharks were playing on the L.A. Kings’ Pacific division, their players still garnered angry boos from the stands. Tough crowd.

The fan favorite of the night — aside from the cuddly team mascots — was obviously Ducks center Ryan Kesler’s little son, Ryker, who stole the show skating and scoring like a pro. 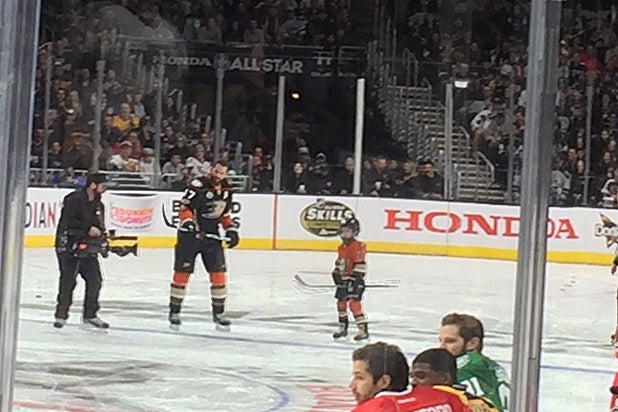 See below for the full roster of the Celebrity All-Star Shootout.