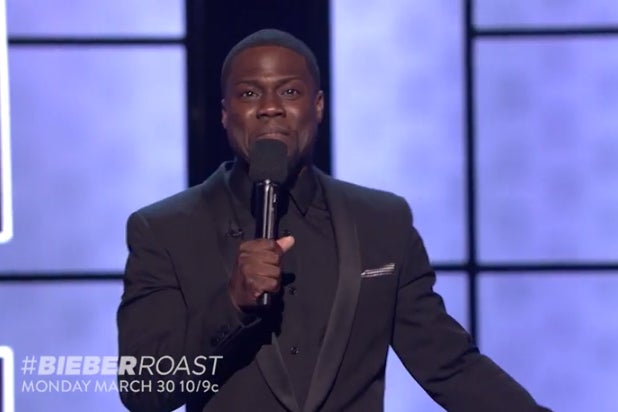 Justin Bieber did not get off easy during Saturday’s taping of his Comedy Central roast — so save that sticks and stones folklore for another occasion.

Even in brief previews, which were released on Monday by the cable channel, the pop star faced some fightin’ words.

“Tonight, we’re going to do what his parents and the legal system should have done a long time ago: we’re about to give this boy the ass-whooping that he deserves,” host Kevin Hart promised.

And Hart had the right people to do it, the comedian said. “We got Ludacris, we got Snoop Dogg, Shaq — this is crazy. Usually when I see this many brothers sitting together, Maury Povich is about to open an envelope.”

“The roast fans really want blood tonight, even though most of your fans haven’t even had their periods yet,” self-proclaimed Roastmaster General Jeffrey Ross said in a second preview, calling the singer a “cocky little shit.”

“You are the King Joffrey of pop,” Ross summarized, channeling HBO’s “Game of Thrones.”