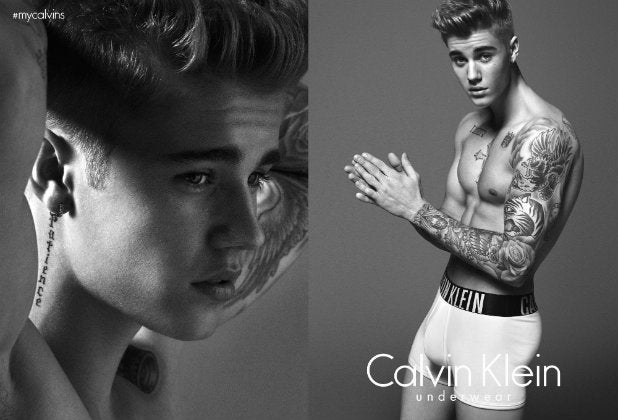 Justin Bieber has joined the ranks of mega-celebrities to model for Calvin Klein.

The “Believe” star strips down in a new series of black and white advertisements released Tuesday, that are sure to send his legion fans into social media frenzy with the featured hashtag #MyCalvins.

“It begins,” the singer said, posting the shots to his Facebook page: one shadowy look at his profile, one of Bieber in a pair of long briefs that shows off his ripped chest and elaborate tattoos. A third imagine of Bieber getting close to model Lara Stone was shared on the designer’s Instagram account, for the Calvin Klein Jeans collection.

Bieber and Stone teased their shared ad, in a way, as Bieber flaunted another pair of Calvins during September’s “Fashion Rocks” concert special, where he performed as Stone strutted down the runway.

The nearly-nude collaboration has been a long time coming for Bieber and the designer, who famously featured Mark Wahlberg, Brooke Shields, Kate Moss and more recently hunks like Kellan Lutz in their skivvies. Bieber often rocks the label during performances and in his shared candid photos.