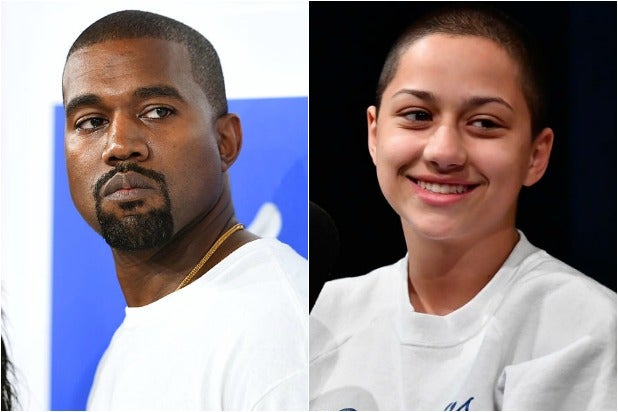 Kanye West has a new look inspired by the person he calls “my hero” — Parkland shooting survivor Emma Gonzalez.

Yeezy posted a photo on Twitter Saturday of the gun rights activist with a caption that read “my hero Emma Gonzalez.” It was followed quickly by a tweet of himself with a closely shaved head and the caption, “inspired by Emma.”

Gonzalez, 18, and many of the students at Marjory Stoneman Douglas High School have been on the forefront of calling for stricter gun control laws since the shooting in Parkland, Florida, that killed 17 of their peers on Feb. 14.

The young activist responded to West by tweeting a photo of James Shaw Jr., the man who wrestled a rifle away from a gunman who opened fire in a Nashville Waffle House that killed four on April 22. Shaw, who suffered a grazed bullet wound in the struggle, has since raised nearly $200,000 for the victims’ families.

After the shooting and before Shaw was identified as the hero, Gonzalez wrote, “The local police say a man at the scene wrestled his gun away — looks like you don’t need to arm a teacher (or a resource officer) to stop a shooting.”

All this comes following a week of praise West has lavished on President Trump, who has said that one solution to the recent rash of deadly school shootings might be to allow teachers to apply for concealed carry permits, which would allow them to carry guns on school grounds.